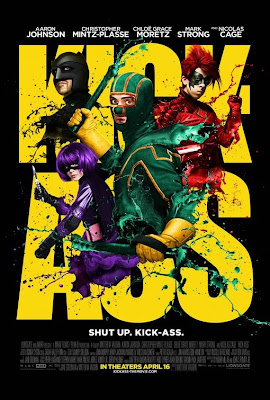 Director:  Matthew Vaughn
Cast:  Aaron Taylor-Johnson, Nicolas Cage, Chloë Grace Moretz
Plot:  Dave Lizewski is an unnoticed high school student and comic book fan who one day decides to become a super-hero, even though he has no powers, training or meaningful reason to do so.


IN RETROSPECT (Spoilers: NO)
Has anyone tried kicking their own ass?  It’s technically very difficult and requires a skillful contortion of the foot.  I can’t do it, but I think it feels good to have your ass kicked once in a while.  That is why Matthew Vaughn’s latest film is such a welcoming presence.  Kick-Ass kicks ass and it is your ass that is on the line.  Leave your ass there. Be kicked and enjoy the show.

Vaughn’s film is a roaring delight.  It is a decent popcorn film that will mostly please the male demographic.  But it is also a film that finds itself riding too much on clichés and references from the comic book-cum-superhero genre.  Actually, that is part of the fun of watching Kick-Ass.  But during parts when the film goes “original” and tries to develop its main characters and plot, it works out as quite flat and uninspired.

Kick-Ass stars Aaron Johnson as Dave Lizewski.  Dave is a college student who leads a normal (read: boring) life.  He is plain-looking, doesn’t have luck with girls, and like any comic book geek, he fantasizes of becoming a superhero.  No big deal.  Until he dons a green wetsuit with a mask and calls himself Kick Ass.  He gets into the thick of action and tries to prevent crime and finds that he is not at all ready for the responsibility, if any, bestowed upon him by himself.

In a parallel story, a father-daughter partnership wreaks havoc against the brutal Frank D’Amico (Mark Strong) and his men.  Their motive is revenge.  Nicholas Cage plays Big Daddy and Chloe Moretz plays Hit Girl, superhero wannabes who actually have an array of destructive firepower at their disposal.  Ever seen an 11-year old girl violently slaughter a gang of hitmen?  If Quentin Tarantino ever decides to make a superhero movie, this would be it – violent, vulgar, and a hell lot of fun.

Vaughn has made an entertaining parody of a popular genre.  There’s no doubt about it.  If I may be kind, the film’s high amusement factor distracts viewers from the paper-thin characters.  You may not feel it during the film, but when the final shot suggests a possible sequel, ask yourself this: Are you going to watch that sequel because you had such a fun time with the first?  Or is it because Kick Ass and Co. have so little character development among themselves that you desire to know more about them?  Maybe it’s both.

Vaughn’s track record has been commendable thus far.  His first two features were Layer Cake (2004) and Stardust (2007).  Comparatively, Kick-Ass ranks as a minor disappointment.  But it is still compulsively watchable.  And the fact that kids aren’t supposed to be allowed to watch this adds to the oh-so guilty pleasure.

Unknown said…
I've just watched it and my oh my, is this an awesome film or what. Haha... It's the most entertaining film I've watched in a while because it doesn't shy away from extremities; it lets us savour every single drop of irony in every shot that's fired and every drop of blood shed. At the same time, the film remains grounded in a very honest narrative setting that any adolescent (esp. guys, I would think) can instantly relate to. I agree that this is no character study or profound drama; the few moments of melodrama in the film are arguably its weakest links. But I'm all too glad it didn't try to be any of those, for these two hours were pure escapist pleasure, a dreamer's bold (if unsurprisingly naive & sketchy) manifesto for a more optimistic world where the good always prevails. =D
May 10, 2010 at 4:52 PM