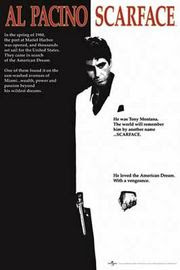 THE SCOOP
Director: Brian De Palma
Plot: In 1980 Miami, a determined Cuban immigrant takes over a drug empire while succumbing to greed.

OST:
IN RETROSPECT
Scarface is Brian De Palma’s loose remake of the classic gangster picture of the same name by Howard Hawks. Instead of Chicago in which the latter is set, De Palma’s film is set in Miami, giving it a timely relevance during the early eighties. During that time, there was an influx of illegal immigrants (many of them Cubans) into America, especially into Miami. Tony Montana is one of them, a fictional character created by screenwriter Oliver Stone (the Oscar-winning director of Platoon (1986) and JFK (1991)).

Scarface follows Montana (Al Pacino) as he rises to power to become one of the country’s most wealthiest and ruthless gangsters. He makes money through a lucrative business in drugs. Not surprisingly, he snorts cocaine himself. He is greedy, arrogant, and lusts over his boss’ girl, Elvira (Michelle Pfeiffer). In the middle of his huge mansion, there lies a sculpture with a ball on top with the words “The World Is Yours” emblazoned.

The irony of those words are laid out in bare in the final sequence, perhaps Scarface’s most (notoriously) famous one – a bloody shootout in which Montana wields a huge weapon and attempts to gun down intruders to his house. De Palma’s film is very violent, and in an early scene, a chainsaw is used to torture a victim. This scene shows the director at his skillful best, using quick editing and indirect framing to suggest the gruesomeness of the act rather than through direct means. This makes it so much more stomach-churning.

Scarface has somewhat become a cult classic over the years, but truth be told, it is a pretentious film. It is, in my opinion, a B-grade gangster picture dressed up as an Oscar contender. It is a campy experience, does not take itself seriously (to its detriment), and will probably get worse on subsequent viewings. The electronic score by Giorgio Moroder is absolutely appalling; it is dull, lacking in substance, and is a mismatch for a film with such a heavy subject matter.

Al Pacino’s performance is bad in a good way. He puts on a Cuban accent and exaggerates his acting that it becomes unintentionally funny. Montana turns into a caricature of sorts, like a cartoon character in an animated comedy. One could praise Pacino for elevating a sub-par film to something borderline watchable. Because De Palma has (wrongly) opted for a campy style, it is only wise for Pacino to take his acting in that direction too.

While Scarface gives some insights into the lifestyle of the drug underworld, one feels that it may not be as definitive as Scorsese’s Goodfellas (1990), the greatest picture of its genre, and many times more compulsively rewatchable. De Palma is talented but he is not a great filmmaker. He is way too inconsistent and his films do not often connect with viewers. Scarface would have been a failure if not for Stone’s intense screenplay and Pacino’s “cartoonish” performance. Montana is unforgettable, but Scarface is not.

daniel said…
Hahaha! Watched this 2 years ago, Absolutely loathe this movie too! thank goodness i rented it. Its so overrated, especially amongst the white trash who think al pacino's cuban accent is cool and " say ello to ma lil 'vrend " is one of the most gut-wrenching lines in movie history.
November 25, 2011 at 1:43 PM

Eternality Tan said…
Ah, I agree. I didn't like this film. But it still warrants a passing grade. I don't understand why there are people who worship this film. I suspect because it's more of the "legend" of Tony Montana, rather than the film's supposed "greatness".
November 25, 2011 at 2:11 PM