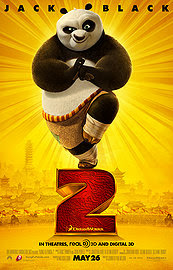 Director: Jennifer Yuh
Plot: Po joins forces with a group of new kung-fu masters to take on an old enemy with a deadly new weapon.

IN RETROSPECT
What’s there not to like about a fat panda demonstrating his prowess in the art of kung fu fighting? Po (Jack Black) returns in the second installment of the much loved Dreamworks’ Animation hit Kung Fu Panda (2008), once again teaming up with his fellow band of warriors to try to defeat a villain, Lord Shen (Gary Oldman), who harbors the evil dream of conquering China with his latest invention – a cannonball weapon. Very much adhering to the action-comedy formula laid down by its prequel, Kung Fu Panda 2 is a blast to watch on the big screen.

Directed by newcomer Jennifer Yuh, Kung Fu Panda 2 impresses with its attention to cultural detail. The computer-generated visuals give a distinctive Oriental feel and many of the majestic architecture bear striking resemblances to that of Miyazaki’s Spirited Away (2001), though they are not as magical or poetic as the hand-drawn quality of the latter. Yuh’s direction is excellent for someone embarking on her debut feature. The film never lacks energy and vigor, and packs quite a lot of action into ninety minutes, though it could be said that there is a slight overdose of action scenes, which sometimes can be chaotic to follow.

Unlike sequels that see no growth in the development of their lead characters, Kung Fu Panda 2 tackles Po’s backstory through a commanding use of intermittent flashbacks that are depicted using interesting “paper-cut style” animation. This provides ample development to Po’s character and gives us a strong reason to empathize with him. Surprisingly, the filmmakers handle the emotional nuances of Po’s early years very well, with an especially touching scene involving his mother abandoning him in a wooden crate of fruits and vegetables while hunting wolves presumably lead her to her death.

Kung Fu Panda 2 references popular culture, though not as explicitly as some of Pixar’s films like Toy Story (1995) or Finding Nemo (2003). Most notable ones include a reference to Jackie Chan (who voices one of the characters here) movies involving trying to avoid signs on top of a moving vehicle, and a Terminator 2: Judgment Day (1991) reference that sees Po “coming back up” on a rotating wheel ala Schwarzenegger. While not as fun and carefree as the first installment, Kung Fu Panda 2 still packs a solid punch. I do look forward to the certainty of a part three, which will most likely involve an emotional paternal struggle over Po.