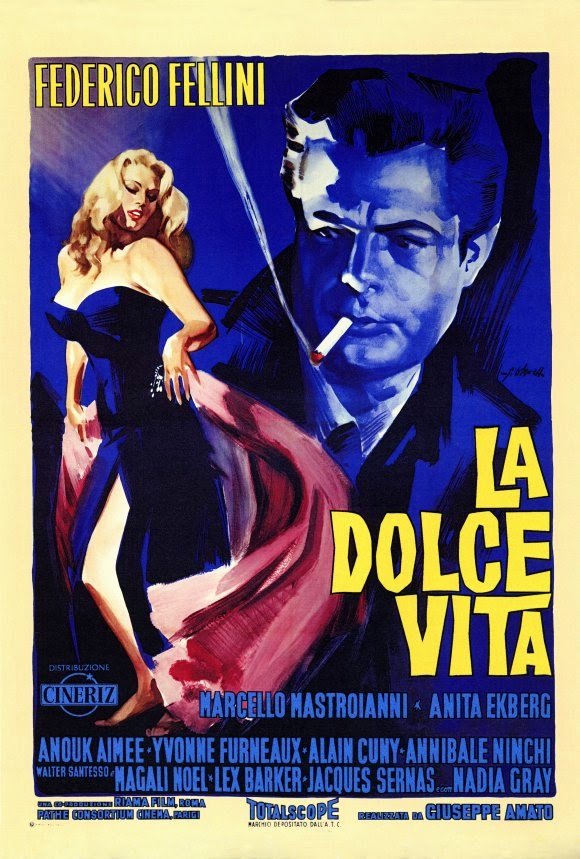 Director:  Federico Fellini
Cast:  Marcello Mastroianni, Anita Ekberg, Anouk Aimée
Plot:  Journalist and man-about-town Marcello struggles to find his place in the world, torn between the allure of Rome's elite social scene and the stifling domesticity offered by his girlfriend.

IN RETROSPECT (Spoilers: MILD)
There is so much critical acclaim for La Dolce Vita that I feel the pressure to give this a high rating.  Unfortunately, I think this “Fellini masterpiece” is severely overrated.  While there is much to admire in this film that gave birth to the word “paparazzi” from a character named Paparazzo, a news photographer who with a camera in arm scurries here and there like a rat in a maze trying to get a money shot, I feel that it lacks the emotional depth of some of Fellini’s great works.

La Dolce Vita, which means “the sweet life”, remains a visually admirable film of an excellent standard, but I was not quite satisfied with the experience.  There was not one moment when I cared for the lead character, Marcello Rubini (Marcello Mastroianni), a journalist who dreams of being a serious writer but is sucked into the decadent lifestyle of 1960s Rome, chasing celebrities and seeking aristocratic acceptance.  He has a domesticated fiancée whom he does not love.  Instead, he goes around sleeping with beautiful, high-status women.

Running at an epic length of nearly three hours, La Dolce Vita follows Marcello for seven days and nights as he meets various people in all corners of Rome.  In the film’s most iconic scene, Marcello is seduced by Sylvia (Anita Ekberg), an American celebrity actress, under the stunning backdrop of the Trevi fountain.  Fellini, whose many films ooze style and energy, was also a creator of flamboyant images, which when accompanied by the music of one of his most frequent collaborators, Nino Rota, represented some of the most magical moments in Italian cinema.

But while La Dolce Vita is certainly a stylish film with quite impressive, and at times panoramic, black-and-white cinematography, it somewhat lacks in terms of energy and drive.  Much of the film after the Trevi fountain scene goes a bit downhill and appears lackluster.  Thankfully, the film is punctuated by a beautiful yet off-key scene shot away from urban decadence of an innocent country girl interacting with Marcello who is trying to type a novel.

La Dolce Vita is not always a pleasure to watch.  Of course, many would strongly beg to differ.  But its long-winded nature does not go down too well with me.  What still keeps this “Fellini masterpiece” alive as one of the key works of post neo-realist Italian cinema is the seductive allure of Ekberg, and the capturing of a past that seems light years away, yet its themes appear remarkably more relevant now than it was half a century ago.  While a second viewing might change my mind about this film, I am not quite tempted to try. 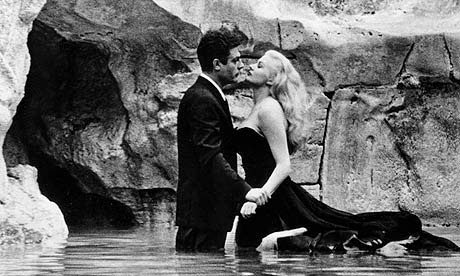 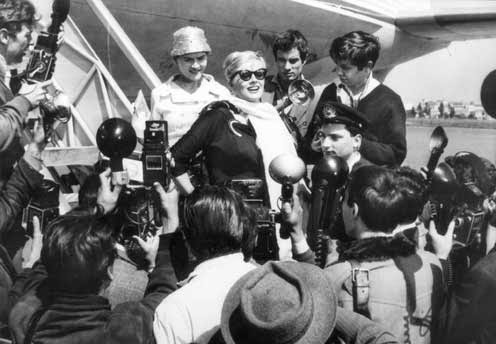 daniel said…
If there are 2 words i can use to describe Fellini after La Strada, they would be 'indulgent' and 'meandering'. La Dolce Vita, 8 1/2, Amarchord are all sooo ridiculously pretentious :/ What a waste of time. Btw, i watched this film too today, in lieu of your upcoming review, and i was looking forward to see your reaction to it haha :) I had the movie on my laptop for a long,long time as i couldnt find the time to watch it. But, oh well, fantastic review of a crappy movie :)

Oh and btw, did you buy this film or rent it from gramophone? I rented it from the Cathay gramophone to download to my laptop. What about your La Strada, Last year in marienbad? Where did you buy them from?

Eternality Tan said…
Wow, this is the first time I have heard anyone say they watch a film in lieu of an upcoming review. I bought the DVD at HMV for about $12 (there was an offer!). But on hindsight, I would rather have rented it like you did.

daniel said…
Well, i wanted to give an honest opinion on Fellini anyway, and your upcoming review actually made me watch it. :)

I recommend the gramophone at Cathay: i rented several classics such as Jules&Jim, Les Diaboliques, Wages of Fear, Wild Strawberries, The Seventh Seal, Viridiana, All That Heaven Allows, Ivan The Terrible, The 39 Steps, Rififi from the 'criterion' album.

Also, the gramophone at Taka is much smaller but i intentionally paid $50 to rent The Cranes Are Flying, Nosferatu, The Cabinet of dr caligari, Picnic at the hanging rock.

Eternality Tan said…
Yes, I have thought of that too. It's just that I have bought way too many DVDs in the past, and have not managed to catch up.

Worse, I am still continuing to buy DVDs, speaking of which, I think I should start renting as it is more cost effective in the long run.
June 9, 2011 at 12:11 AM

Eternality Tan said…
I don't bother to count. You can try counting from my DVD Collection link from my blog. I think it's roughly about 250?

daniel said…
oh... so what do you think of Fellini? have you seen 8 1/2? Honestly, i despise his films. Antonioni's films are actually much much worse than Fellini's, so much more pointless meandering. A few days ago i watched l'avventura and it bored me to tears. For example, a man walks down the street and goes past a corner, and the camera continues filming the empty street. Do you think it's a good scene?
June 9, 2011 at 2:29 PM

daniel said…
I find it strange how you can admire Last Year At Marienbad for it's lack of meaning and its arcane sense of perception, yet slam La Dolce Vita for its un-interesting main character and our inability to identify with him. I mean, Resnais film certainly did not advance the viewer's understanding of the characters and served to distance the viewer from the characters and a concrete storyline. Speaking of relevance in today's context, Last Year At Marienbad has dated and aged as compared to La Dolce Vita.

So, im curious to know your ratings for both films. Were your opinions of both films based on your overall experience; whether they were satisfying and ravishing to the mind or were they just based on criteria such as character development etc.
June 10, 2011 at 11:58 AM

Eternality Tan said…
I rate films not from a long checklist of criteria e.g. direction, story, acting, editing etc, but on two factors: (1) The general quality (both technical and artistic) of the film, and (2) The general satisfaction level I felt after the end of the end credits.

For LAST YEAR IN MARIENBAD, it scored very well for (1), and after the film, I felt positively intrigued as the experience was unique.

For LA DOLCE VITA, while it fared fairly well for (1), it was (2) that let me to give it a lower rating. There were times when I got bored during the film, and the overall experience was muted. While I could understand viewers who would rate this a 9 or a 10, but in my case, I was sadly unable to.
June 10, 2011 at 12:27 PM