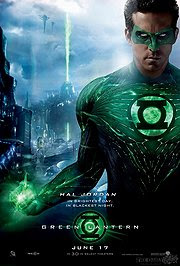 THE SCOOP
Director: Martin Campbell
Plot: A test pilot is granted a mystical green ring that bestows him with otherworldly powers, as well as membership into an intergalactic squadron tasked with keeping peace within the universe.
Genre: Action/Crime/Sci-Fi
Awards: -
Runtime: 105min
Rating: PG for some violence
TRAILER:
OST:
IN RETROSPECT

Another week, another superhero movie to catch on the big screen. This time it’s green, but it is not huge and not by Marvel Comics. Truth be told, not many people know of Green Lantern, unless you are someone who feels that life is not worth living for if one doesn’t know these super-cool guys. If it is reassuring, I am not one of these fanatics. Thus, watching Green Lantern for me is more of an exploratory experience than something I would be giddily excited about. Though I suspect die-hard fans won’t be bobbling up and down in their seats either when the end credits roll.

Green Lantern, for all of its conceptual creativity, is still a relatively weak genre film. And with the blockbuster gale in our midst, this film will not blow audiences away, but be blown away to Oa instead. Oa, as you will see, is a distant planet far away from Earth where Ryan Reynolds’ character Hal Jordan, to his incredulous disbelief, will fly there to undergo training to be part of the Green Lanterns, an intergalactic peacekeeping force of sorts whose superpower comes not only from the green ring they wear but from their willpower.

Directed by Martin Campbell, who famously rebooted the James Bond franchise with Daniel Craig in Casino Royale (2006), Green Lantern however is not always a joy to watch. It is still fairly entertaining and for a first installment in a planned trilogy, the setup and storytelling is at least straightforward and clear. The chemistry between Hal and Carol (Blake Lively), who is his colleague at the Air Force and his romantic partner, is cheesy but minimal, though attempts at humor fall flat more often than not.

The film’s biggest flaw is in its treatment of its villains, of which there are two. The first one is Hector Hammond, who is played by a sneering Peter Sarsgaard. He seems to transform into the evil cousin of the Elephant Man too late into the film. Thus, his presence is more perfunctory to the plot than someone we truly fear. The other villain called Parallax, a huge octopus-like monster alien that is almost as huge as the alien spaceship in Independence Day (1996), is considerably more menacing. It comes from outer space and it feeds on fear, and gives the film’s climax the requisite epicness it needs.

Green Lantern’s visual effects is fantastical and at times cartoonish looking, which somewhat fits with the general campy experience that we get from the film. I must say that the superpowers of Green Lantern are quite eye-opening with the use of mind and will power instead of sheer physical strength or high-tech weaponry. Pity he has to constantly remind himself to recharge his ring with a portable green lantern. It must suck to go about saving the world knowing you have to do that every morning.

If you are still in two minds whether to catch this, I say wait for the DVD release. Or just read the comics, I bet they are much better.
GRADE: C+ (6.5/10 or 3 stars)