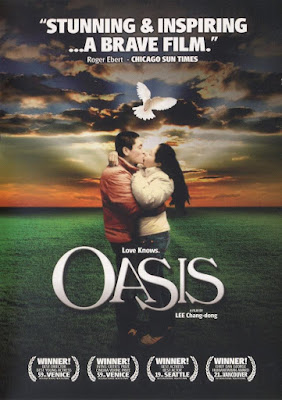 Director:  Lee Chang-dong
Cast:  Kyung-gu Sol, So-ri Moon, Nae-sang Ahn
Plot:  Jong-du, a young man just out of prison for manslaughter, is a social misfit: fidgety, snuffling, laughing inappropriately, without a super ego.  When released, he calls on the family of the victim; they send him away, but not before he has seen Gong-ju, a young woman disabled severely by cerebral palsy.

IN RETROSPECT (Spoilers: NO)
Premiered at Venice to positive acclaim, Oasis won four awards including the Marcello Mastroianni acting award for Moon So-ri and a Special Director’s Award for Lee Chan-dong, but unfortunately missing out on the Golden Lion, which the film so richly deserves to have bagged not because it is a great film, but because it is probably one of the most challenging films to make in that year, or for that matter, in any year.

Oasis is also a very challenging film to watch, not only visually but also through the themes it explores.  But the cinematic experience is ultimately rewarding as we immerse ourselves in the audacity of Lee’s work.

Oasis is a story about love between two most unlikely beings.  One is a mentally ill man who has just been released from prison for manslaughter.  The other is a woman wrecked by cerebral palsy and lives alone in a small apartment, occasionally visited by her relative who brings food.

Both Jong-du (Sol Kyung-gu) and Gong-ju (Moon) are social outcasts, misfits in a society that discriminates them because they look and act different.  Can love bring them together or will society tear them apart?  These two inarticulate characters have to find out for themselves, and the answer is anything but straightforward.

The most striking aspect of Oasis is undoubtedly the quality of acting by its lead cast.  Sol’s acting comprises of a range of socially unapproved manners including constant fidgeting, nose-digging, and acting aloof towards others in the public arena.  His performance is not showy, understated even, yet he brings a natural quality to it that allows his character to be readily identified with.

Even then, Sol is upstaged by Moon whose performance here is so stunning that it has still left me gaping in awe for days after watching the film.  She contorts her body and face in ways too painful to imagine, bravely inhabiting her character’s physical and speech disabilities.

What is most incredible is witnessing Moon’s effortless physical and behavioral transformation from cerebral palsy state to a normal person in some of the film’s dream sequences that are done in one take without cuts.

Admittedly, Oasis is very tough and disturbing to watch in the first thirty minutes or so after Gong-ju’s introduction.  Moon’s acting is so realistic that her character repulses us on first sight, yet we continue to be hypnotized by her performance. Like the titular character in David Lynch's The Elephant Man (1980), we want to look away but we can’t.

However, Lee’s astute direction and the commanding use of camera that follows intensively on the characters’ faces give us the opportunity to acquaint ourselves with these societal misfits.  We feel for them because we are human.  They are frustrated by society’s treatment of them because they are human too.  They find love, strength and purpose through each other.  Are people that selfish to deny them the desire to connect emotionally?

Oasis explores the perils of discrimination and the lack of societal empathy and understanding for those who are unlike us through the overarching theme of miscommunication.  With this highly admirable film, Lee has exposed crucial issues for us to ponder about, without giving easy answers. 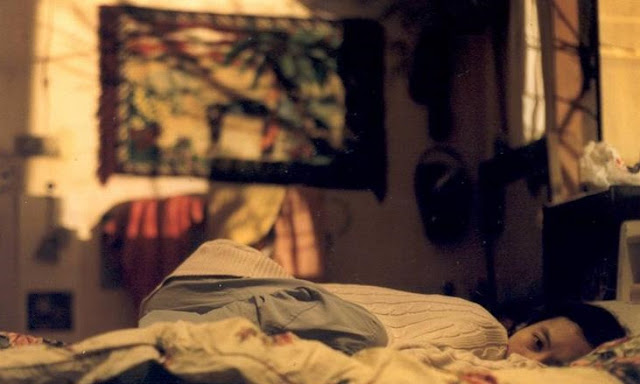 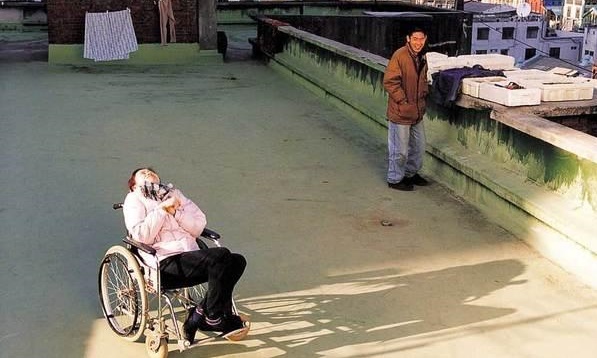