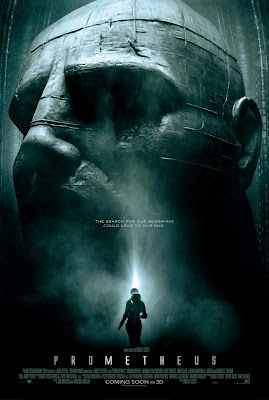 Director:  Ridley Scott
Cast:  Noomi Rapace, Logan Marshall-Green, Michael Fassbender, Idris Elba, Charlize Theron.
Plot:  A team of explorers discover a clue to the origins of mankind on Earth, leading them on a journey to the darkest corners of the universe. There, they must fight a terrifying battle to save the future of the human race.

“A king has his reign, and then he dies. It's inevitable.”

Much has been hyped up regarding the return of director Ridley Scott to science-fiction cinema.  After all, he changed the landscape and pushed the boundaries of what was cinematically possible in the science-fiction genre with two great masterpieces - Alien (1979) and Blade Runner (1982).

But that was in the past.

As Scott returns to the genre he helped defined thirty years ago, expectations are sky-high.  The question on everyone's lips is:  Has the great master nailed it and delivered a superior picture?  As a genuine fan of Scott's sci-fi films, and in particular, my intense love for the genre, I only have this to say:  I admire what Scott has done, but there's a tinge of disappointment in the air.

For the uninitiated, Prometheus may feel like another Hollywood blockbuster (read: a visual effects extravaganza).  But while it features some of the most spectacular visual effects ever seen in any film this year, Prometheus is also an anti-blockbuster in the sense that it takes its time to set its mood and tone.

The story centers on a team of explorers who lands their spacecraft on a planet far away from Earth, hoping to discover the answer to the existence of the human race.  Of course, that is just an excuse for Scott to re-enter the universe of Alien, in a bid to make a 'prequel' that would hopefully explain the origins of arguably the most feared screen monster ever created.

The result is a befuddled attempt to juggle three narrative threads that not only lack clarity, but don't quite fit well with each other.  Is this a story about the origins of the Alien?  Or is it a story about the 'Space Jockey' - a large man-like creature whose exoskeleton appeared in Alien?  Or is it a story of Elizabeth Shaw (Noomi Rapace), whose quest to explore the origins of mankind turns into the kind of nightmare that foreshadows Ripley's traumatic experience in Alien?

Those are questions to ask of the screenwriters Jon Spaihts and Damon Lindelof, whose previous screenplays for The Darkest Hour (2011) and Cowboys & Aliens (2011) respectively don't exactly inspire confidence.

To be fair to Scott, he was seduced by the conceptual idea of Prometheus, not how it was eventually penned out.  Still, his direction is masterful.  So are the film's cinematography, art direction, and production design.

Scott's handling of suspense could be more assured though, but I suspect it is the fault of the film's narrative structure, which has more plateaus than peaks.  There is just too much of travelling back and forth the crew's spacecraft and the mysterious tomb-like cavern that the explorers hope to find answers from.  As a result, whatever suspense that could be generated dissipates as both environments, however strange or fascinating, becomes more familiar and less claustrophobic.

And it was claustrophobia and the unfamiliar that made Alien such a nerve-wreckingly horrifying experience.

Speaking of which, there is one sequence in Prometheus that comes close to emulating the sheer horror (and quality) of the 1979 film. I won't reveal much except to say that it involves an automated operating table.

The strong performances by the unassuming Rapace, and Michael Fassbender, who plays the android David to chilling perfection, help to alleviate the weak script to some extent.

Prometheus is an ambitious science-fiction epic that delivers (or don't) depending on one's expectations.  It is still a solid film, a different kind of blockbuster seeking for the right audience.  Even though the film’s foundation is built on a shoddy screenplay, still it is not to be missed for the experience, especially in 3D.

Verdict:  Ridley Scott sets expectations too high in this generally solid sci-fi epic let down by an unfocused screenplay and suspect pacing. 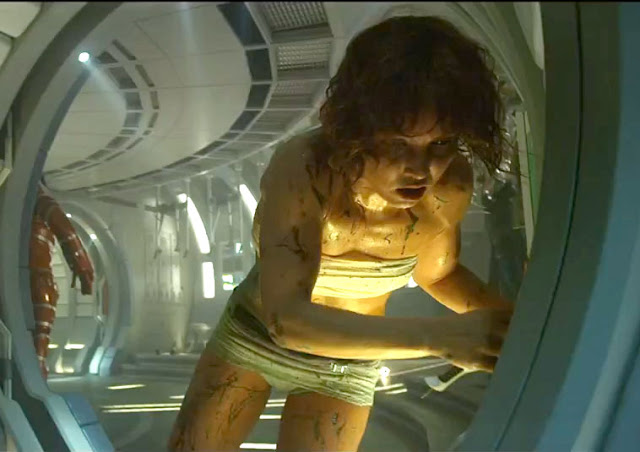 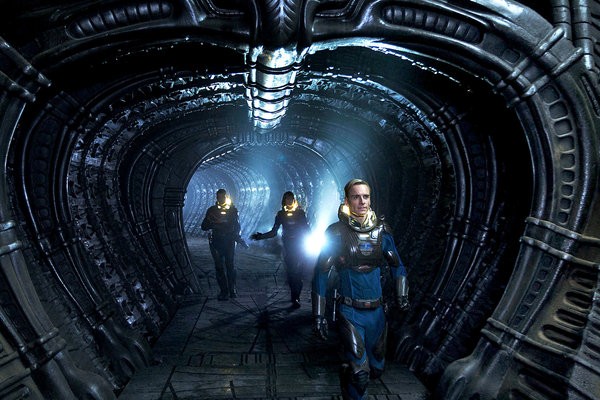 daniel said…
Your review about the lack of suspense because of the familiarity of the environment is spot on. Somehow by the end I felt a little cheated, like Ive just been swindled by a marketing gimmick that beckons for a Prometheus Part Two.
June 9, 2012 at 7:33 PM

Eternality Tan said…
Thank you. I expected more from Ridley Scott, not in terms of visuals (which were excellent), but of the building of suspense, and of course, a more exciting and intriguing story.
June 10, 2012 at 12:29 PM