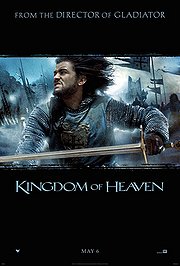 Director: Ridley Scott
Cast: Orlando Bloom, Eva Green, Liam Neeson, Jeremy Irons, Brendan Gleeson
Plot: Balian of Ibelin travels to Jerusalem during the crusades of the 12th century, and there he finds himself as the defender of the city and its people.

IN RETROSPECT
“You are not what you were born, but what you have it in yourself to be.”

Ridley Scott has always been a hit-and-miss filmmaker.  When he hits the bullseye like in Alien (1979), Blade Runner (1982) and Gladiator (2000), Scott can be one of the world’s most accomplished filmmakers.  But when he does not, like in this dud called Kingdom of Heaven, it’s best to cover your eyes.

And covered my eyes I did in this three-hour plus epic that tried to be like Gladiator, but ended up probably as bad as Alexander (2004).  You might have guessed that I caught the longer Director’s Cut version that has been generally viewed as superior to its 144-minute theatrical version.  Well, let’s just say that I can’t imagine how atrocious the theatrical cut would probably have been…

Orlando Bloom is Balian, a village blacksmith in need of salvation who is suddenly graced by the presence of his long lost father Godfrey (Liam Neeson).  Balian then travels to Jerusalem where he is thrust into royalty and finds himself trying to defend the city and its people from an imminent attack by the Muslims.  Of course, this is set in the time of the Crusades, almost a millennium ago, where Christians and Muslims wage war on each other continuously.

Nothing has changed for the better ever since, only that now more sophisticated weapons are used.   If there is one thing that Kingdom of Heaven does right, it is its sensitive treatment of the conflict between the two religions.  There are no good or bad guys here, merely people who are victims of their own historical circumstances.

Much of the criticisms of Kingdom of Heaven point to Bloom’s uninspired performance.  I don’t quite agree.  I feel that he has given an adequate, though not memorable display.  The supporting characters as played by Neeson, Jeremy Irons and Brendan Gleeson, however, do outshine Bloom, perhaps reinforcing the claim that Bloom is incapable of leading a film.

By far and large, Scott’s film is breathtakingly beautiful.  One can expect no less from a director who has built a reputation for being ‘visionary’.  The blue tinting of most scenes in the film lends a sense of cold ruthlessness to the bloody rampage that is to come.  But the use of CG effects to enhance the battle sequences in the climax is quite superficial and seems to add nothing of weight to the proceedings.

The two chief architects of the film’s demise as a quality picture are Scott himself, who clearly shows that he is too indulgent in style and perhaps too ambitious in interpreting the word ‘epic’, and composer Harry Gregson-Williams, who is probably one of the least interesting Hollywood composers working today.

He does okay in the dramatic scenes, with Middle Eastern influences underlining some of its quite enthralling melodies, but when it comes to battle sequences, the flat, generic orchestral sound with the annoying use of choir makes it very exhausting to experience.  Covering your ears won’t work.  But you can try.

Verdict: This sprawling epic is beautifully shot, but has huge flaws as the result of excessive stylistic direction from Ridley Scott and an appallingly generic score from composer Harry Gregson-Williams. 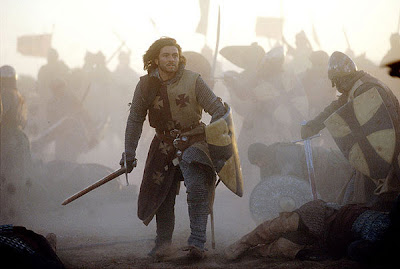 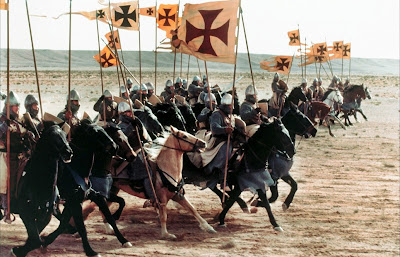