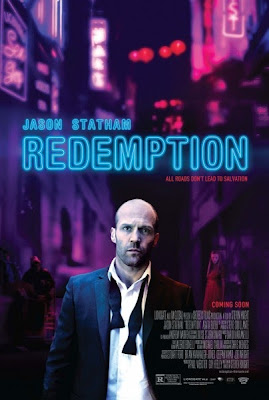 To say that most Jason Statham films are dumb is not to disparage their quality.  Some of the most thrilling and exuberant offerings in his oeuvre (to this reviewer, at least) – the Expendables diptych, the Crank franchise – so wholeheartedly revel in their dumbness that they become a kind of commentary on their genre and its tropes.  They own their dumbness – and in doing so achieve a kind of grandeur.

Redemption is an attempt by writer and first-time director Steven Knight to redress that dumbness. There is no need to fix what isn’t broken, of course, but there is no harm in venturing into more dramatic ground.  Yet, Redemption’s screenplay lets Statham down (and not the other way round).  Less a mindless action flick than a mindless romantic … story, well sort of, Redemption is a thoroughly stillborn and bizarrely structured movie, though it is not without its bright spots.

Playing Joey Jones, a disgraced former Special Forces officer blamed for messing up a mission in Afghanistan, Statham manages to bring to his character the hard-boiled edges, muscular frame and the quintessential don’t-mess-with-me attitude we’ve come to expect of him.  Those attributes jibe well with the serviceable knuckle-crunching action flicks that he has been doing for many years.

But here, with limited opportunities for him to dish out the martial mayhem and sardonic one-liners, those qualities feel wasted.  A little more introspection and complexity, instead of the usual man-on-a-mission single-mindedness, would have made his character more sympathetic.

His character, Jones, returns to London from Afghanistan and wanders the streets as a homeless man.  He befriends Sister Cristina (Agata Buzek), a Polish nun with her own demons, and eventually assumes the identity of a gay man whose home he sneaks into and finds vacant (the owner happens to be on vacation).  He takes up a job in a restaurant, and soon works as a runner for a Chinese mafia leader (Benedict Wong), and that is when things start to get messy.

Jones also has an estranged ex-wife and a young daughter, the latter whom he loves dearly but is unable to see often.  These scenes do lend some emotional weight to the film, and Statham proves that he can bring anguish and sorrow to his character convincingly, but those are ultimately superfluous.  So is the movie as a whole: full of invocations of important ideas – PTSD, past trauma – but with nary anything important to say about them.

The film also stumbles around from scene to scene, and never builds up any real momentum along the way.  The not-quite-love story between Jones and Sister Cristina is devoid of any chemistry and is a bore to watch.

Cinematographer Chris Menges does offer up a beautiful vision of London, especially the nocturnal cityscapes.  But that only does so much to make Redemption more enjoyable.  It’s fine that the movie is dumb.  That it is dumb AND joyless is not.