THE SCOOP
Director:  George Miller
Cast:  Tom Hardy, Charlize Theron, Nicholas Hoult
Plot:  In a stark desert landscape where humanity is broken, two rebels just might be able to restore order: Max, a man of action and of few words, and Furiosa, a woman of action who is looking to make it back to her childhood homeland.

In a promotional interview for Mad Max: Fury Road, Tom Hardy claimed that you aren't really watching a movie.  Instead you'll feel like you are in George's head.  That claim is not farfetched.  And I suggest you go see the film right away.  It is one of the finest action films in recent memory, so outrageously shot and directed by George Miller that not many movies that heavily involve vehicular chases can hold a candle to.

A post-apocalyptic road movie set in Australia (but shot in the desert dunes of Namibia in Southwest Africa), Max Max: Fury Road stars Hardy in the title role previously played by Mel Gibson.  He is one of numerous captured slaves to a reigning empire in control of resources like water, and gets acquainted with a renegade warrior Furiosa (Charlize Theron) during her attempt to flee and return back to the place of her birth.

Hardy’s Max is stoic and quiet, a man of mystery, but a true blue road warrior.  He gives a decent performance, but is eclipsed by Theron’s ferocious display.  Nicholas Hoult, who has a major supporting role, also delivers superbly.  The feeling I get is that the movie is not so much about Max’s story as it is about Furiosa’s.

The debate over the strong feminist quality of Miller’s work is interesting, plainly because of Furiosa’s singular commitment to a cause that connects us emotionally, but it also reveals the ideological nature of the hero(ine) in Hollywood movies.  Miller has contended that his movie is not about pushing the female agenda (well, not when the entire movie features an assortment of phallic trucks with fetishistic extensions), but of the will power of a human being, driven to drive.  It could very well be Max, but would the debate turn its head?

Inspired by the practical effects of the original trilogy, particularly The Road Warrior (1981),  which Miller also directed, he conjures up some of the most utterly insane vehicular chase sequences in movie history.  Minimal CGI is used for the action, with most of the physical stunts executed as they are shot.  The environment, in hues of bright yellows and deep blues, however, is enhanced by CG effects, particularly a sandstorm that is too fake to suck you in.

Ultimately, as Hardy has asserted, the movie is about being in the head of a visionary, whether you are convinced by how the movie plays out or not.  Mad Max: Fury Road is thoroughly engaging, with smart allusions to how our world has become, and how we want the world to be.  It is dizzying, chaotic and intense.  It’s what I would call sledgehammer cinema, and one of the greatest action pictures in recent memory.

Verdict:  An utterly insane vehicular chase road movie that ranks as one of the finest and most outrageously shot action films in recent memory. 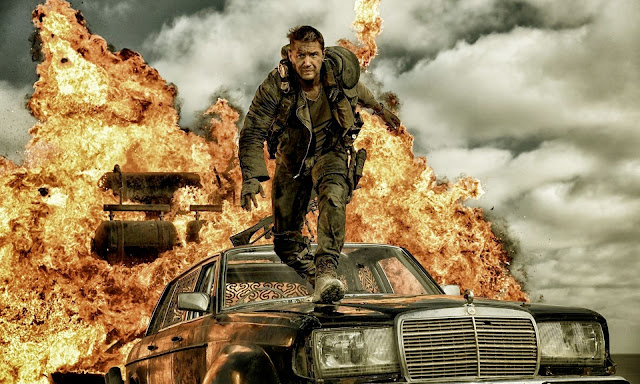 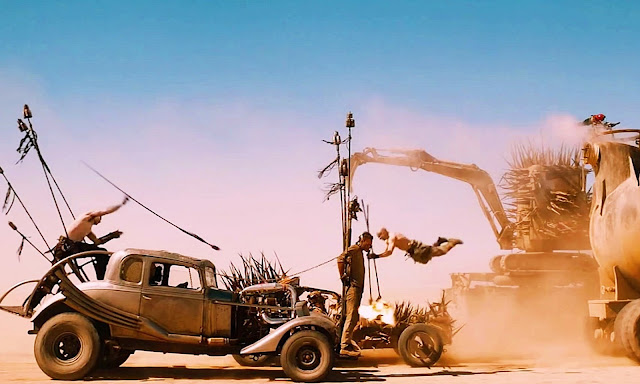