Brian De Palma is in top form with Blow Out, one of the films in his 'Hitchcock' phase that continues to age well, yet retaining the sleazy and gritty 1980s feel of macabre crime-thrillers.

Expertly shot with the Steadicam, award-winning cinematographer Vilmos Zsigmond (Deliverance, 1972; Close Encounters of the Third Kind, 1977) and De Palma bring to the table a visual palette that gives us striking images of horror, suspense and intrigue as we (together with John Travolta who plays Jack Terry) attempt to unravel the mystery of a suspected political assassination.

Jack is a sound recordist for exploitative B-movies, but when he is out one night to record sounds of nature, his recorder also captured the sounds of a car tyre blowing out and the car crashing into the river.  The dead man is a candidate for presidency, but Sally, the woman whom Jack saved from drowning has no relations with the deceased.

Together, though with some reluctance on Sally’s part, they seek to get to the bottom of the conspiracy.  Jack believes he has the evidence to prove that it was no mere accident, but someone is out to silence him.

Nancy Allen, who plays Sally, enjoys an easy-going chemistry with Travolta, both giving decent performances.  But what makes Blow Out such an entertaining film is De Palma’s tight screenplay and a sense of rhythmic pacing.

In one of the film’s most memorable sequences, Jack tries to piece together shot-by-shot photo cutouts of the accident (apparently taken by an eyewitness videographer) with the sound recording, so that when it runs through the projector, the piece looks like a short scene from a film.

De Palma’s situating of the technique and art of moviemaking as a running thread throughout the film is clever and satisfying.  Its opening sequence, a no-frills homage to Psycho (1960) and Halloween (1978), and maybe even his own Carrie (1976), is sensational if misdirecting.  But the film’s final scene takes the cake – it is morbidly cheeky, even devilish.

Like Coppola’s The Conversation (1974), Blow Out works at a similar level in its commentary on surveillance, conspiracies and irrational fears.  In some way, I see Blow Out as one of De Palma’s more political films, even if he hides it very well in thick sheep’s clothing.

Verdict:  You gotta love De Palma – Blow Out is a twisted and suspenseful mystery, and also a clever if devilish testament to the art of moviemaking.


Click here to go back to Central Station.
*Last viewing - May 2018 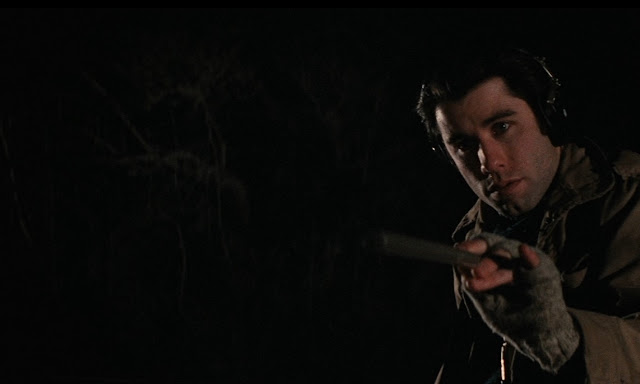