THE SCOOP
Director:  Edward Yang
Cast:  Tsai Chin, Hou Hsiao-Hsien, Ko I-Chen
Plot:  Lung, a former member of the national Little League team and now operator of an old-style fabric business, is never able to shake a longing for his past glory.  He is living with his old childhood sweetheart Ah-chin, a westernized professional woman who grew up in a traditional family. Although they live together, Ah-chin is always wary of Lung's past liaison with another girl.

Screened in 35mm as part of the ‘Also Like Life: The Films of Hou Hsiao-Hsien’ retrospective at the National Museum of Singapore.

Taipei Story is Edward Yang's follow-up to his debut feature That Day, On the Beach (1983).  It has been regarded as one of the finest films about living in '80s Taipei, starring Yang's New Taiwan Cinema colleague Hou Hsiao-Hsien and popular singer Tsai Chin as a couple who faces the challenge of making ends meet in an industrializing city, while at the same time trying to better their strained relationship.

I am quite reserved in my reaction towards the film, and not willing to confer too much praise in what I feel is an overrated if still meaningful piece by Yang.  Hou, a master filmmaker himself, plays Lung in a rare leading performance that doesn't quite suggest that he is a promising talent, but with Tsai's similarly ponderous performance, there's a strange love-hate chemistry that is at once endearing but also distancing to audiences.

It is a slow film, and while the methodical look at relational conflict and the sustenance of romance is at the heart of the entire work, it doesn't quite engage in ways that make us truly care for the characters.  They are confused beings, and for Lung in particular, stuck between two worlds – his past glory of being a competitive baseball player, and his meandering present trying to work a way to move forward in life.

There's a sense of stasis for these characters, lost in the sea of change.  Both harbour hopes of emigrating to America to start a new life.  But would Taiwan be any different once globalization (and westernization) is at its peak?

The most memorable scene of Taipei Story is set on the rooftop of a building.  Against an enormous Fuji advertisement display, two silhouettes are seen.  The contrast is striking – two lonely, directionless souls are dwarved by a menacing force.  There is no escape from the harsh reality, and even if there is a temporary respite in the form of companionship, Yang suggests that the world is not a bed of roses.

Taipei Story is not a depressing work, but it is realistic about reality.  In light of Yang's other much more outstanding films like A Brighter Summer Day (1991) and Yi Yi (2000), Taipei Story feels like a minor offering.

Verdict:  Yang’s second feature is a slow and methodical look at romance and conflict set against the modernization of Taiwan, though it isn’t really an outstanding film. 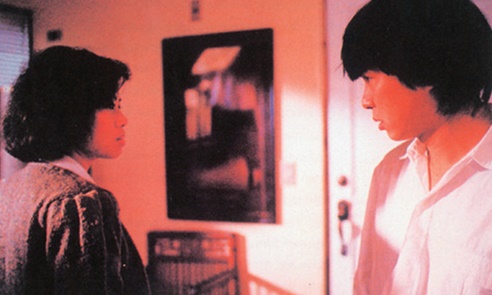