Before Taxi Tehran (2015), which won the Golden Berlin Bear, The Circle was director Jafar Panahi’s most highly-awarded work with a Golden Lion win at the Venice Film Festival in 2000.  It certainly is one of his most piercing films, a firing shot of sorts that reverberates with a resounding ring-in-the-ear in its no-holds-barred treatise on the plight of women in Iran.

As the beginning credits roll, we hear the painful cries of a woman giving birth, before the wonderful cries of the baby fill the air with momentary joy.  It is also a moment of truth.  A woman receives news that it is a girl, and it seems like the world has just crumbled in front of her.  It is an unforgettable opening, one that would chart the path for the film as it attempts to reveal through unforgiving circumstances the state of women’s existence in a repressive country policed by men.

There’s no doubt that Panahi is a superb director.  Shot in neorealist style with a raw aesthetic, the camera traverses the streets and buildings of a city in Iran, following the little stories of women caught in predicaments, be it slight or serious, and almost always centering on their inability to function as normal human beings except through clandestine means.

Panahi's women in The Circle may take on a more extreme depiction—most are women on the run from prison (where they are kept for a period of time for ‘crimes’ that men would normally get away with), as they struggle on the streets without an ID.  But they have social support from each other, their circle as it were, silently defiant in the face of masculine authority and being an agent of their own limited freedom.

The movie title also suggests a like-for-like replacement in an ever growing ring of disenchanted women.  One escapes, another is captured.  But the walls of captivity are borderless; it is merely a prison in a larger prison.  Which is why it is a shrewd strategy by Panahi to adopt a bead-like narrative structure, as he follows the story of one woman after another.

The Circle remains to be a controversial work in modern Iranian cinema, and with his follow-ups Crimson Gold (2003) and Offside (2006), the left-leaning filmmaker would continue his social realist modus operandi for many years to come.  Even his subsequent house arrest in 2011 and 20-year ban from filmmaking yielded three more superb slyly political films.

Verdict:  This Venice Golden Lion winner is a powerful treatise on the plight of women in Iran, told through a refreshing bead-like narrative and shot in neorealist style. 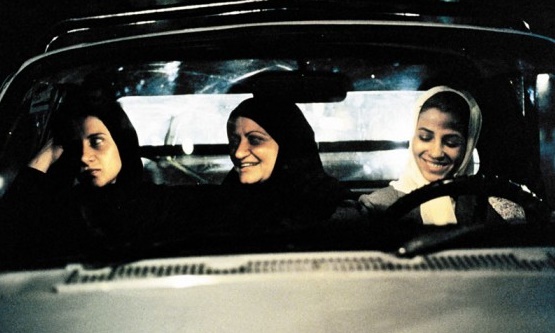