THE SCOOP
Director:  Khyentse Norbu
Cast:  Tshering Dorji, Sadon Lhamo, Thinley Dorji, Tony Leung, Zhou Xun
Plot:  Somewhere deep in a forest of Bhutan, there is a gathering every twelve years of men and women chosen by the Old Man to enjoy a few days of anonymity.  Masked silhouettes participate in rituals, performances and dances.  Faceless, the men and the women allow themselves to be lascivious, playful and daring.

I have heard of Khyentse Norbu for some time, but haven’t quite explored any of his films.  All I can say is that Hema Hema: Sing Me a Song While I Wait is not the best place to start in your discovery of Bhutan’s most famous filmmaker.  It is his fourth feature, after The Cup (1999), Travelers and Magicians (2003) and Vara: A Blessing (2013), all of which I’m eager to see if the opportunity comes.

Norbu is certainly an interesting figure.  Trained in Tibetan Buddhism and regarded as a highly-revered monk, he has monastic duties first, and filmmaking pursuits second.  His first contribution to cinema was to provide consultative work for Bertolucci’s Little Buddha (1993).  Six years later, he made his and Bhutan’s first ever feature film.

Hema Hema could be his most controversial film.  There are scenes of clubbing and drinking, scenes of masked persons having sex in the deep forest, and the picture largely has a sense of “negative energy” (as an audience member pointed out in a post-screening dialogue with the film’s production manager).  How could a man, so religious in his spiritual duties, make a film that expresses humans’ primal desires?

Hema Hema begins in a club with loud, techno music as the camera follows a woman into the washroom.  It is an intriguing prologue, oozing with style and rhythm, and could easily have been a scene in, say, Hou Hsiao-Hsien’s Millennium Mambo (2001).

After which, a sudden tonal shift brings us deep into a natural environment of vast greenery.  Henceforth, Norbu develops a concept where a group of masked men and women gather every twelve years to enjoy a few days of anonymity in collective isolation.  It is ceremonial and ritualistic, and no one dares to unmask out of fear of being known.

It is no doubt a fascinating premise, and we follow a man who becomes infatuated with a woman.  As Buddhist teachings would allude, desires will lead one down a treacherous path.  Perhaps that’s the point of Hema Hema, to show that humans can commit deplorable acts when their identities are unbeknownst.

Culturally, this concept has no roots in Bhutanese tradition.  But the masks, designed and painted so beautifully (and for some, to ghastly effect) are a sight to behold, some of which are actual masks dating back hundreds of years.

Much of Hema Hema may center on hidden desires, but the film also tries to comment on modernity to mixed effect, sometimes jeopardising its tonal consistency.  An example is a scene (that irks me to no end) involving modern dance and music in the middle of the forest in the later part of the film—where has subtlety gone to?

Overall, Hema Hema is never enthralling, and although some of its philosophical musings of birth and death do remind us of our ephemeral existence, it is a film that is easy to appreciate, but difficult to embrace. 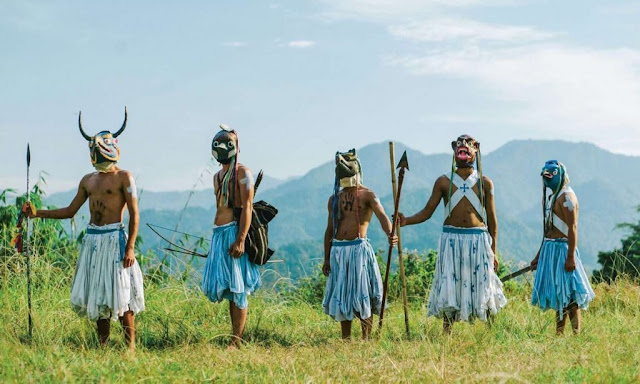 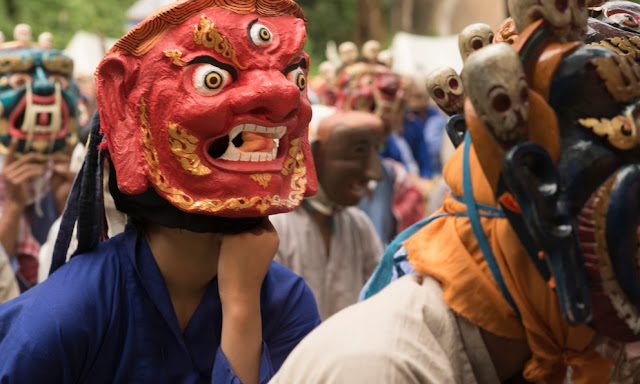 ckyt said…
Hi, I have much to disagree with your entire review, for it is very negatively portrayed. First, your statement that "Trained in Tibetan Buddhism and regarded as a highly-revered monk, he has monastic duties first, and filmmaking pursuits second" is inaccurate. He is not a monk and does not hold the Vinaya vows (which are disciplinary conduct for ordained monks only).

Next, with regards to your statement, "How could a man, so religious in his spiritual duties, make a film that expresses humans’ primal desires?" is rather humorous. I would like to question, what do you think is the purpose of spirituality? Is it to pretend that such "primal desires" don't exist and cover up ourselves with layers of pretty masks to hide our shame, pretending to be someone "pure"? Pretending to be pure by hiding such aspects are basically lies to yourself and others. In fact, pretending to be pure is analogous to having "primal desires". Why? Because pretending to be pure is with the intention to get people to think highly of you, which is one of the worst kind of masks you can wear. Spirituality is about moving us closer to the truth. Would you prefer to live in a lie than having the truth shoved into your face?

In fact, someone who can directly present this "primal desire" shows that he is really open minded to understand the positive and negative aspects, and thus, go beyond both. And this is clearly shown in the film, which I believe you have missed. As mentioned by the Production Manager who was there to answer the questions, the film shows both the negative aspects (e.g. lust) and positive aspects (e.g. power of regret, redemption). However, your review is disappointing as it is audience centric rather than film centric, whereby you focussed on an audience's opinion of “negative energy”, failing to bring in the other aspects of the film.

Moreover, you mentioned, "As Buddhist teachings would allude, desires will lead one down a treacherous path". I hope you know what the word desire means. Desire is not just what is portrayed in the film (e.g. lust), but it is craving. Basically, anything that you crave for such as chilli crab, plasters, bath towels, fame, praise or reputation (such as from writing this blog since 2007) etc. are desires. Even the main character wanting to make amendments is a form of desire - Is this kind of desire necessarily bad? So if your understanding of desire is just limited to lust, then I must say, that is a really narrow minded perspective, in which the Buddhist teachings are not confined to.

Another aspect of your film critic was, "An example is a scene (that irks me to no end) involving modern dance and music in the middle of the forest in the later part of the film—where has subtlety gone to?" I think you have again, missed the point of the reason for the usage of modern clubbing music. You must understand that the film tried to portray a 24 years gap. Think, has the type/genre of music changed for past 24 years? Of course it has! What the film is trying to show is that whether it is 24 years then or now, the context remains the same. That is real subtlety!!

The thing is, you are wearing a mask as you write this review. And so am I. But do we acknowledge it? If yes, that means we acknowledge our motivation, be it positive, negative or neutral. Seeing our motivation, what do we do next? Do we use this power of anonymity to go ahead with the positive, negative or neutral actions? If you don't acknowledge you are wearing a mask, then perhaps, you are too caught up with the experiences that the power of anonymity gives to even notice. What are our choices and what do we choose to do? That perhaps, is one of the message the film tried to bring across, in my personal opinion.

For more information on the film, please visit: https://www.facebook.com/blackhat.production/. The filmmaker answered various questions in a few screenings in Taiwan.
December 13, 2016 at 11:17 PM

Thanks for your insights -- good to know what another person thinks of the film from a differing perspective. And I reckon from your dissection, from a different background and way of thinking from me. All views are legitimate and valid. Some have agreed and disagreed with me about the film in my conversations with them. But due to lack of time (and it's not really in my interest), I don't think I'm keen to dissect your post.

I don't wish to dwell too much on Buddhism too as it is not my forte, just as Christianity is not my forte when reading a film such as 'The Last Temptation of Christ', a remarkable work on desire and faith. I am a cinephile and follow the body of work of many different filmmakers around the world. I think I have seen enough in 'Hema Hema' to want to see Norbu's earlier works.

Thanks for your support!