THE SCOOP
Director:  Wanuri Kahiu
Cast:  Samantha Mugatsia, Sheila Munyiva
Plot:  "Good Kenyan girls become good Kenyan wives," but Kena and Ziki long for something more.  When love blossoms between them, the two girls will be forced to choose between happiness and safety.

IN RETROSPECT (Spoilers: NO)
If this came from any other non-African country, it probably wouldn’t have had so much fanfare.  But because this is Kenya’s first film to be selected to compete at the Cannes Film Festival, not to mention it was also ignominiously banned in its home country for homosexual theme, therefore it would have been impossible for Rafiki to have gone under the radar even if it wanted to.  And this is a good thing as there is attention drawn toward this rather familiar and unoriginal work.

Transplant the story into another setting, and the characters into a different race, and you get a typically ordinary LGBT film, but—and here’s how the mind weirdly works—because of its current setting and characters, the film becomes exoticised by Western, and perhaps even, Asian eyes.  What an eye-opener it must be to experience a story of two native lesbian girls in an African country… or so liberal mainstream perceptions would seem to suggest.

Rafiki, which means ‘Friend’, centers on Kena (Samantha Mugatsia) and Ziki (Sheila Munyiva) who fall in love with each other despite the social stigma accorded to anyone who engages in a same-sex relationship.  To add insult to injury, their fathers are political rivals, hoping to win local votes in an upcoming election.  For Kena and Ziki to be good friends is already a tall order, let alone as lovers.

Directed and co-written by Wanuri Kahiu in what is her sophomore feature, Rafiki may be a rote rendering of other similarly-plotted movies, but its unpretentious approach gives it high watchability.  Its accessibility permeates through the performances of the duo, whose strong chemistry help make the film flow with warmth and earnestness.  Their love for each other is so pure and innocent such that it is not just a marker of a fantasy they wished were real, but also a bearer of optimism for the future—that a glimmer of faint hope exists for these girls who yearn to not become ‘another Kenyan wife’.

Although the election backdrop is there to keep viewers engaged with the town’s socio-political situation, it is mild and doesn’t seem to interfere or add much suspense to Kena and Ziki’s relationship.  In a world of their own but knowing that they are a gossip away from being exposed, the girls seem to acknowledge that their time together is limited even if it appears like they could be together for eternity.

Verdict:  Banned in Kenya because of its homosexual theme, this is a familiar and at times rote rendering of other similarly-plotted movies that came before it, but its unpretentious approach gives it high watchability. 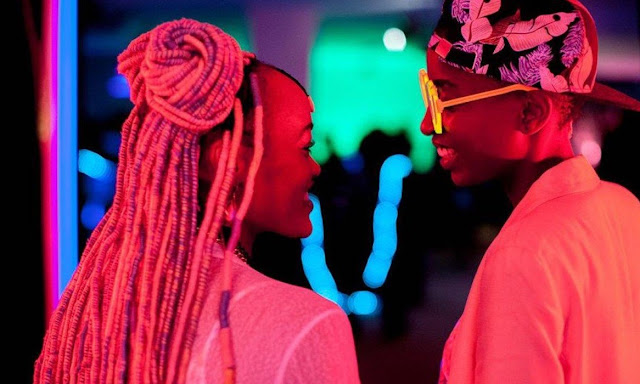 
Banned in Kenya because of its homosexual theme, this is a familiar and at times rote rendering of other similarly-plotted movies that came before it, but its unpretentious approach gives it high watchability ~ 3.5★/B [ Dir. Wanuri Kahiu | 2018 | Kenya | Drama/Romance | 83 mins | Not rated ] RAFIKI / © MPM Premium #rafiki #wanurikahiu #kenya #worldcinema #africancinema #cannesfilmfestival #lgbt #queercinema #romance #love #drama
A post shared by Eternality Tan (@eternalitytan) on Jul 23, 2018 at 5:47am PDT