THE SCOOP
Director:  Kihachi Okamoto
Cast:  Toshirô Mifune, Shintarô Katsu, Ayako Wakao
Plot:  Zatoichi tries to unrest the mob rule over a small village all while the gang leader's bodyguard is actually the Yojimbo, secretly taking the gang down from the inside.  Will the two heroes realize in time that they are on the same side?

I think many people expected it to be a tantalizing showdown between two iconic Japanese screen characters, when in actual fact the movie is more concerned with drawing out drama through its myriad of twists and turns, revelations and deceptions.  After all, this is not Zatoichi vs. Yojimbo, and as the film's title clearly suggest, it is a crossing of paths (not of swords) of these two flawed heroes.

They do cross swords though, albeit briefly, but director Kihachi Okamoto is not interested in their duel.  Rather, he is more curious as to what they can bring to the table in terms of their personas, worldview and (in)action.

This is the 20th film in the long-running series featuring the infamous blind masseur with unparalleled fighting skills (much like the James Bond of Japanese ‘jidai geki chambara’ (period swordfighting) movies).  The fact that it is directed by Okamoto, possibly the most well-known filmmaker to helm a Zatoichi movie, puts this particular installment under greater spotlight (and scrutiny).

The plot is uncharacteristically convoluted and the film takes its narrative heft far too seriously, but what I can distill from it is this: the film is about Zatoichi (Shintaro Katsu) who returns to his old village that is now ruined by a controlling gang.  The eternally drunk Yojimbo (Toshiro Mifune), who is secretly trying to destroy the gang from within, is suspicious of Zatoichi’s presence.  The film is likely to lose you along the way, because plot-wise it is a mess.

Still, the superb cinematography by Kazuo Miyagawa (who famously worked with Kenji Mizoguchi in gems like Ugetsu (1953) and Sansho the Bailiff (1954)), and the intense if comedic performances by the two leads, continue to hold your attention.

I find the wonderful chemistry between Katsu and Mifune crucial in giving the film a sardonic wit.  These are wandering men – on another day, at another time, their paths would not have crossed.  Yet, they are equally flawed, corrupt and greedy, not unlike the gangsters and people in positions of power.  Through their encounters and constant acts of cynicism toward each other, they become mirrors of each other’s weaknesses.  But they also see that they are better than those that surround them.

Verdict:  Fails to live up to its billing, but while it has its moments of intense swordplay and comedy, the convoluted plot is a downer in what should have been a brisk and to-the-point affair. 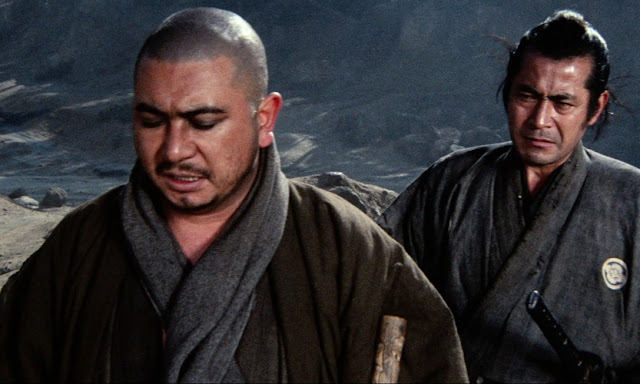 Fails to live up to its billing, but while it has its moments of intense swordplay and comedy, the convoluted plot is a downer in what should have been a brisk and to-the-point affair ~ 3*/C+ [ Dir. Kihachi Okamoto | 1970 | Japan | Drama/Action | 115 mins | PG ] ZATOICHI MEETS YOJIMBO / © Toho #zatoichi #zatoichimeetsyojimbo #yojimbo #swordplay #drama #action #japanesecinema #japan #criterioncollection #kihachiokamoto #complicated
A post shared by Eternality Tan (@eternalitytan) on Feb 18, 2017 at 7:32am PST