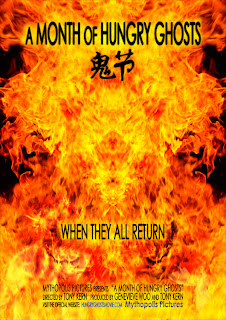 THE SCOOP
Director:  Tony Kern
Plot:  Every year, during the 7th lunar month, it is believed that the gates of Hell are opened and all the souls are set free to wander the earth. The film explores how and why a whole nation, world-class and cosmopolitan, is utterly enthralled by A Month of Hungry Ghosts.

Directed by Tony Kern, A Month of Hungry Ghosts is easily misinterpreted as a horror flick.  So it is interesting to observe that some theaters have a cautionary sign which says that this film is 'of a documentary nature'.  But then the blame lies on those who market the film. "Warning: Scenes in this movie are real and may be frightening to some people", reads a poster.

Those who know that it is a documentary are likely to react: "Hey please! Of course the scenes are real, c'mon it's a doc!"  Those who are deceived that this is going to be another Asian horror show will probably react: "Yeah right! It is going to be so scary that I'm so going to watch it.A Month of Hungry Ghosts is likely to attract far less viewers than other films showing right now.  It has a potentially boring subject matter, and it is a film of a genre that is one of the least popular around.  Recent docs such as Scorsese's Shine a Light (one of the best films of 2008) and last year's Oscar-nominated Sicko (2007) by Michael Moore prove that the genre can be as fun and enticing as blockbusters.

Comparatively, Kern's film hardly entertains; the minutes tick by so slowly, yet it triumphs because I've never seen a better local documentary than this.

Although the content is categorized specifically into sections such as 'First Day', 'Last Day', 'Singapore Paranormal Investigations', 'Getai' etc, these sections are presented in a random fashion that do not really link up well.  What we get are pieces of well-crafted jigsaw pieces that merely fit; the big picture is slightly distorted, thus giving us the feeling that Kern's film could have offered more in terms of helping us to connect more effectively to all the information on the Hungry Ghosts Festival that we can gather from the filmA Month of Hungry Ghosts is still good, educative cinema despite some of its shortcomings.  Though unlike Mad About English (2008), it is not the type of film that one will wish to watch twice. 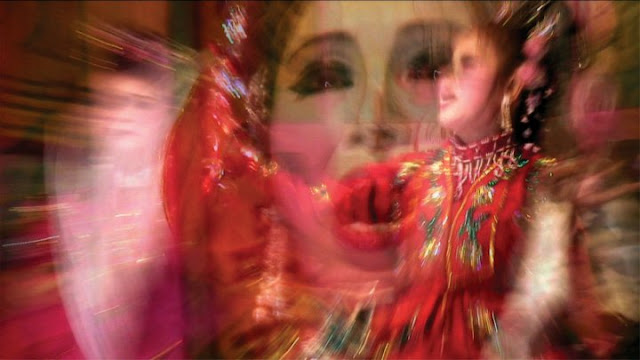