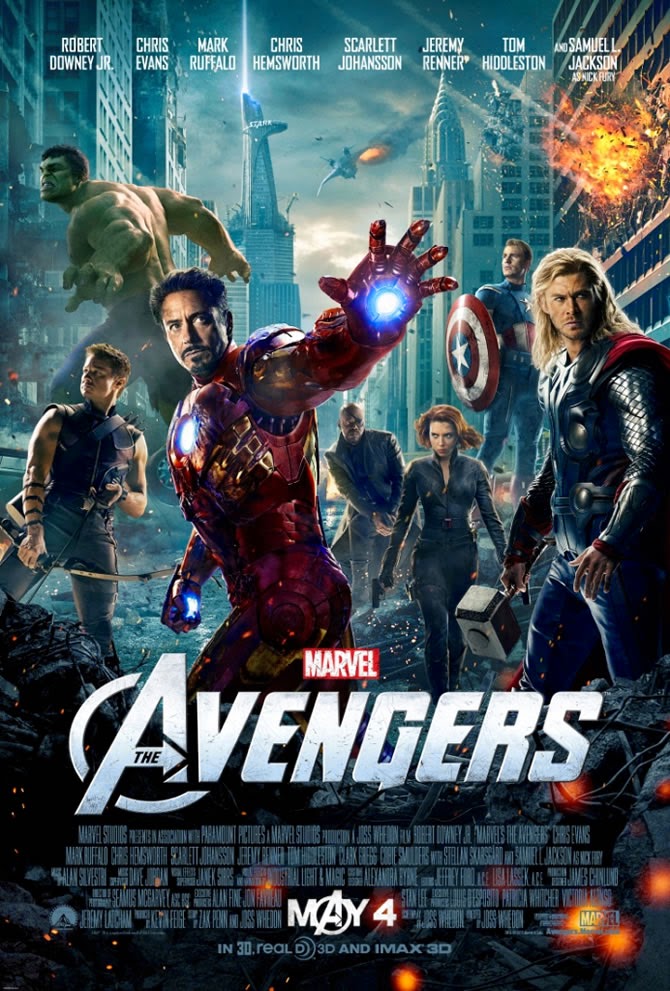 IN RETROSPECT (Spoilers: NO)
The Avengers comes with a weight of expectations so heavy that it takes a man with enough guts to take on material that has preceded him, and turn it into something fresh and enticing for both fans and non-fans alike.

That man with the superhero guts is Joss Whedon, who co-wrote the sensational horror parody The Cabin in the Woods (2012), and who now has the opportunity to show the world that Christopher Nolan is not the only kid in Hollywood’s block who can make a blockbuster tick smartly.

The Avengers is as much a Marvel showpiece as it is a Whedon picture. With the exception of Kenneth Branagh’s Thor (2011), which I enjoyed thoroughly, Marvel has produced popcorn movies that sometimes seem too eager to please.

Whedon makes The Avengers his very own, an effort that combines large-scale action set pieces with a smart, witty script that elevates the film to a level seldom attained by other superhero genre offerings. In fact, what’s most impressive is not the action sequences, but the banter among the ensemble characters that dot the film.

It’s a mammoth task to bring superheroes like Iron Man (Robert Downey Jr.), Thor (Chris Hemsworth), Captain America (Chris Evans), and the Hulk (Mark Ruffalo), and superhumans like Hawkeye (Jeremy Renner) and Black Widow (Scarlett Johansson) together as a band of (misfit) brothers to counter Loki (Tom Hiddlestone), a nemesis hell bent in taking control of Earth with the aid of creatures of an alien race.

Thus, it is highly admirable that Whedon is able to juggle effortlessly both individual character development and character-to-character relationships, devising a narrative that accommodates everyone without losing anyone.

For non-fans, rest assured that The Avengers fulfills its promise to entertain like how a summer blockbuster should be. The climactic action set-piece may be prolonged, but it is well-paced, including a virtuoso sequence that sees the camera follow one superhero to another, and to another in a seamless take.

But if there is any criticism, it is that the final act offers nothing new in terms of action. The attack on Manhattan by alien enemy forces feels like something we have seen before, a CG-orgy of destruction and devastation like in Transformers: Dark of the Moon (2011). Yes, it is spectacular, but it does not take your breath away.

For fans, The Avengers is more than just seeing Marvel superheroes joining forces to combat a global threat. It’s seeing them interacting with each other, which is why the best moments in the film are when the action pauses.

The Avengers comes very close to being the definitive superhero movie of the 21st century generation. It meets expectations, though it doesn’t surpass them. Still, it’s a feat of blockbuster screenwriting. “Shakespeare in the park?” says Iron Man. Gee, how Branagh must have dug that.

marsha|| said…
Your verdict kinda confirms what I had felt reading through your review - do you rate it for being a good movie or for being a good superhero movie? By extension, are you a Marvel/comic-book/superhero fan? I'm not, and I wonder if it could be why I didn't like this film. I agree there are many plus points but I'm disturbed by how overrated it's been. I understand you watch many films so I don't understand how it should make any top 10 lists.
December 26, 2012 at 4:36 PM

Eternality Tan said…
Hi, thank you for your comment. I must say it was one of the more entertaining films of the summer. So for me, it was a good movie, and an even better superhero movie. I am not exactly a Marvel/comic-book/superhero fan. I am not terribly excited about upcoming superhero flicks like IRON MAN 3, but I look forward to reviewing them.

I think THE AVENGERS may have been overrated by Marvel fans willing to defend the movie with their lives. But as a summer blockbuster, I thought it was entertaining and had a good script that was not pretentious. Hence, I gave it 4 stars.