THE SCOOP
Director: Robert Kenner
Plot: An unflattering look inside America's corporate controlled food industry.
Genre: Documentary
Awards: Nom. for 1 Oscar - best documentary.
Runtime: 94min
Rating: PG for some thematic material and disturbing images.
TRAILER:
IN RETROSPECT
Do you know from egg-to-death, most farm chickens in America live in total darkness so that they do not quarrel so much, and they are force-fed to three times its natural weight that it renders them immobile to the extent they eat and sleep in their manure? Or that the beef we consume sometimes comes from cows which are fed with dead chickens? It does not matter if the meat finds its way into your favorite cheeseburger or an expensive steak house, their fate remains the same.
Every time you step into your local supermarket, you are greeted with rows and rows of food products. You may marvel at the huge variety offered but it is actually an illusion. Do you know a huge stake in the world’s food industry is controlled by only four major food corporations in America? This means there is no real competition for your money. Or that nearly eighty percent of items in your local supermarket is made from corn, including - gasp! – batteries and baby diapers?
Food, Inc. reveals these secrets unbeknownst to us for years. As consumers, we have every right to know where our food comes from, and how it is made. Yet whenever there is a case of food poisoning from salmonella or E. Coli, these corporations not only refuse to investigate their possible unsanitary practices, they may even sue the victim for creating a storm in a teacup. It is a lost cause for the average consumer as most laws in America favor these big, faceless, dictatorship-like food companies.
Director Robert Kenner attempts to challenge us to fight for our right as informed consumers and he does succeed for most parts. The documentary is made up of many small ‘chapters’ which debate over a series of interviews and case studies everything that is wrong about the food system today. It is also insightful and thought-provoking, occasionally inciting anger and disgust at appropriate moments. The opening titles are a delight, hooking us from the start, but the film becomes less engaging along the way.
The flaw of Food, Inc. is that it is not very well-linked. It is as if the film is shot and edited immediately after a brainstorm session. The content is there, but the ideas are not arranged in a seamless narrative that flows from one point to another with proper links. The result is a disjointed film with information everywhere but belonging nowhere. Food, Inc. is a half-decent film with its fair share of flaws. The important thing is that the film is able to trigger us to do something. Whether we choose to shoot is entirely up to us.
GRADE: B- (7/10 or 3 stars) 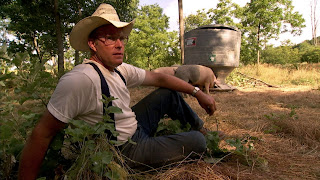 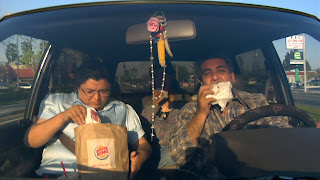