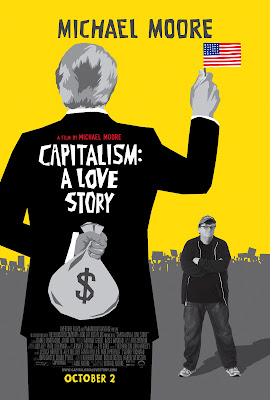 Plot:  On the 20-year anniversary of his groundbreaking masterpiece Roger & Me, Michael Moore's Capitalism: A Love Story comes home to the issue he's been examining throughout his career: the disastrous impact of corporate dominance on the everyday lives of Americans.

IN RETROSPECT (Spoilers: N/A)
Film after film, Michael Moore volunteers himself to be his country’s loudspeaker, giving many US citizens a voice in issues which matter to them but of which they are subdued by larger forces ganging together to diminish the power these ordinary folk ought to have in a democratic society.

While Roger And Me (1989) was an excellent debut, it was only in 2002 when he made Bowling For Columbine did he enter into the mainstream consciousness with a big bang (pardon the pun). He further exposed ’s dark side, attacking the heads of political institutions (especially the Bush Administration) in the controversial Fahrenheit 9/11 (2004) and further cementing his reputation in the remarkable Sicko (2007), a critique of ’s health care system.

The recent devastating economic debacle has left with a new target board to aim at – the financial institutions and their evil control over capitalism. In Capitalism: A Love Story, Moore reveals corruption, greed, and other dark secrets the banks forbid anyone to know. Capitalism, in its original definition, means a system of production and trade based on property and wealth being owned privately without much (or any forms of) government interference. It allows everyone free trade and the right to earn a decent living through making profits. Sounds enticing?

Yes! Until bankers became greedy, that is. Hell, even the government got into the act. These money-suckers widened the income gap, causing the poor to become poorer because the rich had the power (and money) to get even more either by themselves or through the manipulation of the law. Examples of abuse of power I shall not tell, although I can say that it ranges from within the government to financial and insurance organizations to even aviation companies. Watch the film and be shocked by them.

As usual, structures his documentary like an unambiguous narrative, leading viewers from one point to another without confusing them. Moreover, he does it in a serio-comic manner which is highly entertaining, debunking the myth that documentaries are synonymous with boringness. In one scene, he makes fun of Bush, treating him like a clown. In another scene, Nino Rota’s "Love Theme" from The Godfather (1972) plays – the ‘villains’ in this film likened to the Mafia. In the final scene, he surrounds the headquarters of a bank building with a ‘crime scene’ tape and calls on its Board of Directors to surrender themselves for their ‘heinous crimes’ against the public.

plays the audience like a piano, inducing an array of emotions such as sympathy, relief, frustration, and anger (mostly). But he does not treat us as objects of manipulation. In a way, he has matured from playing the ultra-moralist figure in Bowling For Columbine to someone who seeks to investigate rather than to exploit. The star of the show still belongs to though, whose gung-ho activist spirit and strong filmmaking grounding allow him to use cinema as a far-reaching medium to (hopefully) bring change to our lives. Capitalism: A Love Story is, without question, one of the year’s most powerful films.