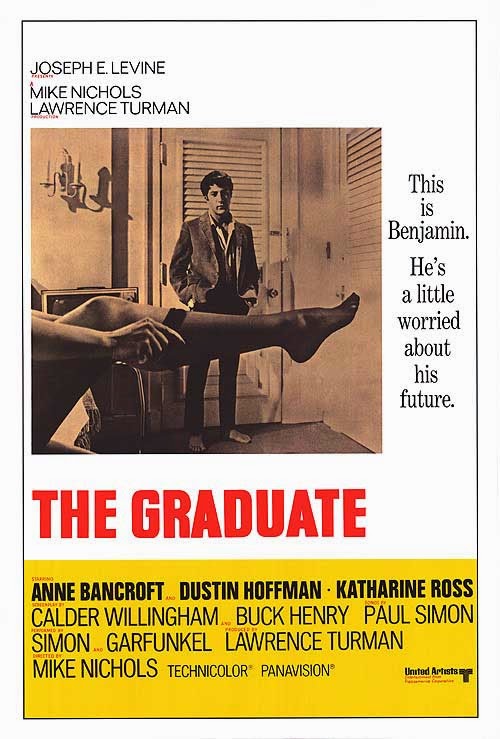 THE SCOOP
Director:  Mike Nichols
Cast:  Dustin Hoffman, Anne Bancroft, Katharine Ross
Plot:  Recent college graduate Benjamin Braddock is trapped into an affair with Mrs. Robinson, who happens to be the wife of his father's business partner and then finds himself falling in love with her teenage daughter, Elaine.

The film which landed acclaimed director Mike Nichols his only Oscar for Best Director, The Graduate is a landmark film of the late 1960s and is universally recognized as a classic of that era.

In only his second feature film after the critical success of Who’s Afraid of Virginia Woolf (1966), Nichols has established himself as one of the leading filmmakers of his generation.  His other notable works include Silkwood (1983), Closer (2004), and Charlie Wilson’s War (2007).  But it is The Graduate which still remains to this day Nichols’ most enduring masterpiece.

Starring Dustin Hoffman who owes Nichols a great debt for launching his career, Anne Bancroft, and Katharine Ross, The Graduate takes a satirical look at American society through the eyes of Ben Braddock (Hoffman).

Ben has just graduated with a degree but he feels apprehensive about his future.  He is a shy person in his early twenties who prefers to be alone than to be in a crowd (or to be the object of a crowd’s affection).  The night of his homecoming, he is seduced by Mrs. Robinson (Bancroft), a married woman in her forties whose husband is a business partner of Ben’s father.

To make matters more complicated, Ben falls in love with Elaine (Ross), the daughter of Mrs. Robinson (who threatens Ben not to date her daughter as she wants him all for herself).  The film seems to be exploring the perils of a love triangle but it does not.  Ben is forced by Mrs. Robinson to have a sexual relationship with her but his true love lies in Elaine.

Nichols intends the film to be a critical look at the “artificiality” of American society and successfully fuses elements of comedy and romance into a coming-of-age tale of a man who is at a loss understanding himself (let alone others), but overcomes his difficulties through sheer perseverance.

The late 1960s signaled the start of a liberal period for American social culture.  This was the period when Americans begun to question their identities.  Each individual became more self-aware, more ambitious, more risk-taking.  In short, freedom of expression of one’s identity became integral to achieving the “holy grail of good life” that was living the American dream.

Nichols beautifully captures this ideal and flaunts his directorial skills at the same time in the film’s most nostalgic sequence accompanied by a yearning rendition of ‘Scarborough Fair’ by Simon and Garfunkel – an extreme close up shot of Ben which slowly pulls away to reveal him in a red open-top Alfa Romeo cruising down the iconic San Francisco Bay Bridge on a bright sunny morning – all in one technically difficult long take.

The real “humor” in The Graduate does not come specifically from its comedic dialogue and set-pieces but from the entire film itself.  The awkward situation that Ben finds himself in lays the foundation for Nichols to elevate his film into something much more than a stereotypical romantic comedy.

The director brilliantly uses Ben to act as an embodiment for our fears, dreams, and desires.  As we observe him stumble his way through an uncertain phase of his life, we don’t know whether to laugh or cry because really it could have been us in his shoes. 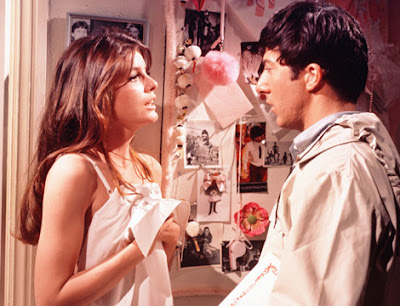