Director: Peter Docter/Bob Peterson
Plot: By tying thousands of balloon to his home, 78-year-old Carl Fredricksen sets out to fulfill his lifelong dream to see the wilds of South America. Right after lifting off, however, he learns he isn't alone on his journey, since Russell, a wilderness explorer 70 years his junior, has inadvertently become a stowaway on the trip.


IN RETROSPECT
Directed by Pete Doctor and co-directed by Bob Peterson, Up is from the guys who created Monsters Inc. (2001) and who work at one of modern cinema’s most consistent production companies - Pixar Animation Studios. Up is the tenth feature film from Hollywood’s Jewel of Creativity following the successes of films such as Toy Story (1995), Finding Nemo (2003), The Incredibles (2004), and Wall.E (2008).


This latest picture is another bold step away from what Pixar has done over the decade, and together with Wall.E (which was considerably bold enough), both represent a significant change in priorities in the company’s vision. Producing family-friendly fare is a thing of the past. Now they are using CG technology to transcend animation filmmaking, to give the once isolated genre devoted to entertaining five-year-olds a strong cinematic identity, one that mature audiences can find themselves unashamed of appreciating.


Up is perhaps the most risky venture by Pixar thus far. The lead character is not a cute fish, or a loveable rat, or a friendly monster, but a short, bespectacled, and grumpy old man with a face as unappealing as a box. How marketable is that? Fears that Up could be Pixar’s first real flop are swept away within the first fifteen minutes. The prologue sequence that introduces Carl Fredricksen is a gem both in its execution and its ability to comprehensively and instantly portray the old man as someone we have no difficulty empathizing.


Carl’s dream of visiting Paradise Falls in South America is triggered to reality when he is forced to relocate to a retirement village. That morning he made his house fly, lifted by thousands of colorful balloons, and propelled by wind as it pushed the curtain-like sails hung out on rails on each side. Russell, a chubby boy with a zest for adventure happened to be on Carl’s front porch when the house made its ascent. Together they explore South America and evade obstacles which appear more life-threatening than they expect.


The introduction of the actual villain Charles Muntz in Up comes slightly too late into the film. Because of limited development of the character, Charles is not as imposing as he should be. While it does create an extent of fear, there is not a moment in the film when we have doubts of the protagonists surviving unscathed. Likewise, the climax arrived too quickly as well. Although the adventures of the leads are mostly engaging, they appear short-lived. I see it as a flaw because the filmmakers could have spent more time adding more action set-pieces to the fray.


As with Miyazaki’s Howl’s Moving Castle (2004), a major influence to this film, physical logic has to be cast aside. Many of the scenes can never happen in reality. Can an old man really navigate a floating house with his frail physique? Can balloons really lift a house? Up tends to indulge in fantasy far more than reality. That is not necessarily a bad thing, but when a film whose devotion to human emotions and bonding (themes grounded in reality) far eclipse that of its far-fetched plot, there is a fair chance that it might turn out to be a mixed bag of unclear priorities. And it does to a small extent. Up is still effective, uplifting, and mostly heartwarming, but it is one of the less accomplished works by Pixar. But that is still saying something. 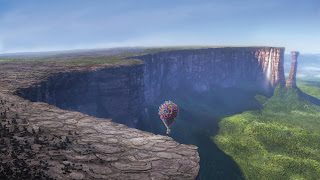 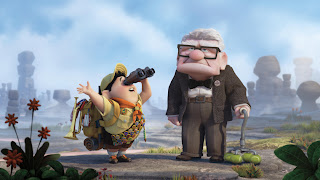