THE SCOOP
Director: Frank Darabont
Plot: The story about the lives of guards on death row leading up to the execution of black man accused of child murder & rape, who has the power of faith healing.


Five years after The Shawshank Redemption (1994), one of the great films of the ‘90s, writer-director Frank Darabont fashions another top-notch film in The Green Mile. Only his second feature, Darabont adapts Stephen King’s novel of the same name into a near-brilliant drama of hope and suffering, love and hate, and most resonant of all, of the belief in faith and miracles. The French director’s love affair with King’s works continues into the next decade, directing The Mist (2007), another drama based on faith but ‘disguised’ as a horror picture.

Darabont’s preoccupation with beliefs and faith runs deep in his films. But it is in The Green Mile which it is most strongly felt. Without giving most of the plot away (for those who have not read the novel or seen the picture), The Green Mile tells the quite incredible story of John Coffey (Michael Clarke Duncan), a murderer sent to the Cold Mountain Penitentiary to await execution. There he meets Paul Edgecomb (Tom Hanks) who supervises the executions, and takes care of the welfare of death row inmates with his team of guards. Coffey is a huge black man, but his simple-mindedness bring an aura of spirit and humanity to the place. Yet it is his ability to create miracles that most fascinates Edgecomb.

Clarke Duncan’s performance outshines a stellar cast including David Morse, and James Cromwell, and is rewarded with an Oscar nomination for Best Supporting Actor. He captures the child-like innocence of Coffey with immaculate skill, and earns our empathy through his display of raw emotionality. For once, Hanks takes a step back into the shadow of this gentle giant, and quite rightly so because this is a film about Coffey and not Edgecomb. The characterizations of each major character in the film are superb; this is not surprising as Darabont has always been admired for his skilled writing.

Darabont is a filmmaker many critics are unable to identify with; he is neither celebrated as an auteur nor does he express a unique (or even visible) style of directing which potentially marks him out as one. In a sense, he is like Ron Howard (Apollo 13, 1995; A Beautiful Mind, 2001), the Oscar-winning director who “turns out well-made genre films that have wide audience appeal, yet (with) no real personal signature.” (Bergan). Yet Darabont continues to make exceptional pictures, with each single effort, apart from The Majestic (2001), consistently getting a high score from me.

The Green Mile is well-produced, and despite the director’s by-the-rulebook approach to making films which translates into more orthodox (and less creative) cinematography and editing, the film very much hinges its success upon Darabont’s mastery of the narrative medium. It is this which pulls us through the film’s weaker portions which happens to be, ironically, parts when the lively Mr. Jingles, a clever mouse, appears on screen. The tone of The Green Mile is curiously light-hearted, though its mix of horror and fantasy seem to play awkwardly on the viewer, if not emotionally, then visually.

The Green Mile is an excellent film in its own right. But such is its curse that The Shawshank Redemption came before it. Inevitable comparisons will be made, and the latter will always be considered ‘superior’. Hell, even The Mist is a more accomplished film than The Green Mile with its scathing social commentary and religious overtones. But if I may add, The Green Mile is thus far the only Darabont film that has made me tear up. “The green mile seems so long”, says Edgecomb in his final line in the film. Yes it is. Running more than three hours, it is a massive film length-wise. But inspirational-wise, it has few peers. 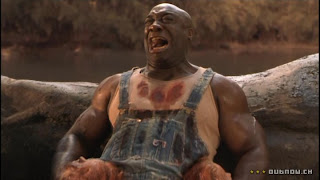 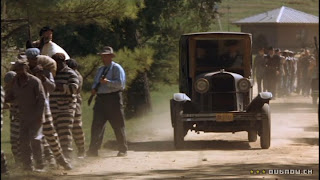