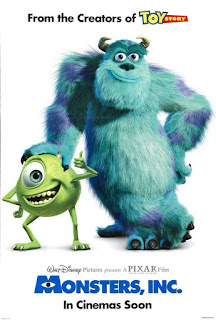 
IN RETROSPECT (Spoilers: MILD)
Not the best Pixar feature ever, but it remains my favorite. Monsters, Inc. is the fourth film to be made after the critical and box-office successes of Toy Story (1995), A Bug’s Life (1998), and Toy Story 2 (1999).  Directed by Pete Docter who later helmed the lovable film about an old man with his flying house, Up (2009), Monsters, Inc. signalled the intent of Pixar to break new ground in creative animation storytelling by a director other than the pioneering John Lasseter (who made the first three pictures).

Monsters, Inc. is an important film because it established the direction of Pixar’s future exploits.  That not all eggs are placed in the basket as carried by Lasseter.  Andrew Stanton and Brad Bird would follow suit with films such as Finding Nemo (2003), and The Incredibles (2004) respectively.  They could only have done so because the success of Monsters, Inc. provided Pixar with the confidence that they had the team (and blueprint) to sustain itself for the next few decades as the world’s major player in animation filmmaking.

The story of Monsters, Inc. is deceptively simple to grasp, even though the concept is intriguing to the mind.  It tells the tale of monsters who work in a factory that generates energy for “Monstropolis” by capturing screams from children terrified of the monsters that come out of their closet at night.  A crisis of immense magnitude happens when a small girl enters “Monstropolis” unknowingly through her closet door, one of millions of portals that link the human world to “Monstropolis”.

Mike, who is light green, shaped like a ball, and has one eye, and Sulley, a big, blue bear-like creature, find her and attempt to bring her back to her home amid a large-scale manhunt for “the highly toxic contaminant” while trying to avoid their sneaky and evil colleague, Randall, a purple gator who can blend into his surroundings.

The relationship between Sulley and Boo (as the former affectionately calls the girl) becomes the heart of Monsters, Inc.  It not only forms the emotional centerpiece of the film, it is also used to stretch Sulley’s close relationship with Mike.  As a quite hilarious study on emotional attachment, friendship, and loyalty, Docter’s film is an excellent work to savor and enjoy.

Intimate moments of bonding between Sulley and Boo are touching.  Like when Boo draws a picture of them holding hands, or when Sulley lulls Boo to sleep through candy.  In a scene late in the film, both of them hug each other in a warm embrace like close friends do when they part.

Many other animated films have “these kinds of scenes”, but none renders them better than Pixar who focus on creating the most genuine of facial expressions, hand movements, and especially, of the characters’ eyes, which almost always transforms the characters (in particular non-human ones) into “identifiable humans” whom we can relate to.

The film is paced like a roller-coaster ride, with one circumstance leading to another.  In between there are tender moments that strengthen the relationships among the protagonists, but they are never too long.  An excellent example is the sequence in which Mike and Sullivan are banished into an icy wasteland.  Despite the sudden change in visual environment (and direction of the plot), Docter steers the film back to “Monstropolis” quickly, keeping the film tight to its main narrative while taking the opportunity to further explore character relations.

Verdict:  Monsters, Inc. is one of Pixar’s best efforts, and represents arguably their most conceptually imaginative picture to date.