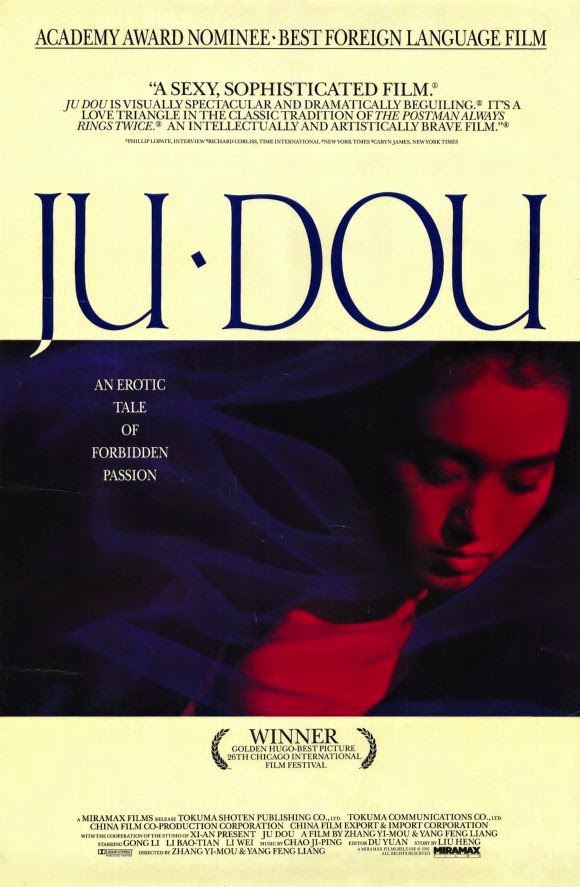 THE SCOOP
Director:  Zhang Yimou
Cast:  Gong Li, Li Wei, Li Baotian
Plot:  A woman married to the brutal and infertile owner of a dye mill in rural China conceives a boy with her husband's nephew but is forced to raise her son as her husband's heir without revealing his parentage in this circular tragedy.

Perhaps the most famous and acclaimed mainland Chinese filmmaker known to the West, Zhang took Chinese cinema to a new level of prominence in the early 1990s, spearheading the Fifth Generation movement together with a few other directors, most notably with Chen Kaige, who made Yellow Earth (1984) and Farewell, My Concubine (1993).

Ju Dou is also the name of the lead character played by Gong Li.  She is a woman in poverty who is bought by a rich old man who runs a dye mill together with his poor nephew, Tianqing.  She is forced to marry him and bear a son.

However, the old man is impotent and physically and sexually abuses Ju Dou every night because she could not give him a son.  She seeks solace in Tianqing.  Slowly, their relationship turns into an extramarital affair, leading to Ju Dou’s pregnancy and birth of a newborn son, which she manages to convince the old man is his.

Steeped in Chinese cultural values and tradition, Zhang’s film is like a classical Greek tragedy set in 1920s rural China.  The poor are exploited by the rich and capable, and it is only a matter of time that something tragic would happen.

The son begins to call the old man his father, who becomes paralyzed after a fall, and later suffers a bizarre death.  The son grows up to be a quiet and violent person, and appears to lay the blame on Tianqing for impregnating his mother, and causing his rightful father anguish.

In the film’s most bitterly ironic sequence, Ju Dou and Tianqing are forced to follow a Chinese custom – to weep, call out to their dead family member, and try to stop the coffin for 49 times.

This sequence is edited in such a way that the scenes repeat themselves, highlighting the raw emotions of the two secret lovers and asking painfully of the question: What’s worse than mourning for a loved one?  To be forced to mourn for someone whom you do not love.

Zhang’s use of vibrant colors is astonishing, and has been an integral part of his visual style over the last two decades.  Huge pieces of cloth dyed in red or yellow are suspended on a rung and left out to dry.  These not only add to the visual beauty of the film but also take on a symbolic meaning, representing themes of love (or lust), and angst.

When a character dies, he drowns in red dye, as yards of red cloth drop and conceal him, like the drawing of stage curtains on a performer after a show has finished.  Together with minimalist music and beautiful, composed shots of rural life, Zhang has created a film that within its picturesque landscape lies a haunting circular tragedy.  It is a very bleak portrait of peasantry life ruined by the strict adherence to cultural traditions.

It is also an indirect but potent critique of China’s Cultural Revolution with the old man taking on the symbol of Maoist brutality and injustice, and 'his' son as the symbol of the Red Guard, brainwashed from young to retaliate against the non-Maoist ideology – the right to individual freedom – as embraced by Ju Dou and Tianqing, but very sadly, cruelly denied.