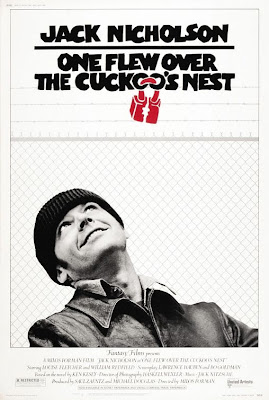 Cast:  Jack Nicholson, Louise Fletcher, Danny DeVito, Peter Brocco, Michael Berryman
Plot:  Upon arrival at a mental institution, a brash rebel rallies the patients together to take on the oppressive Nurse Ratched, a woman more a dictator than a nurse.

IN RETROSPECT (Spoilers: NO)
One of the great directors who have made the effortless change from European cinema to the glamour of Hollywood, Milos Forman has two Best Directing Oscars to show for his achievement in two extraordinary films whose fame would forever be indebted to the highly-respected filmmaker from Czechoslovakia – Amadeus (1984) and One Flew over the Cuckoo’s Nest.

The latter stars Jack Nicholson in an Oscar-winning performance playing Randall McMurphy, a lazy troublemaker who has a history of violence and now fakes insanity that allows him to be committed to a local mental institution.

Randall’s arrival shakes things up in the mental institution.  He makes friends with a deaf and mute American-Indian called Chief Bromden (Will Sampson) and establishes a love-hate relationship with Nurse Ratched (Louise Fletcher), the institution’s dictatorial head nurse.

Always up to mischief, Randall’s rebellious nature sees him heavily involved in a series of situations leading up to the film’s shatteringly powerful climax that is not only emotional wrenching, but oddly inspirational as well. With an exceptional supporting cast of “mental patients” played by talented character actors such as Danny DeVito and Brad Dourif, Forman’s film is a tour de force in ensemble acting.

Both a brilliant behavioral comedy and an intricate drama, Cuckoo’s Nest blends strong character interplay with moments of side-splitting situational humor such as the iconic scene of Randall playing foolishly with the water cooler.  The sequence that still takes my breath away no matter how many times I see it is the one that starts with Charley Cheswick (Sydney Lassick) pleading Nurse Ratched to return his cigarettes and ends in utter chaos involving nearly everyone in the madhouse.

Although the film pokes fun at the unfortunate lives of shackled mental patients, by the end of the film, Forman’s sensitive direction would have allowed us to observe the dehumanizing effects of institutionalization.

Cuckoo’s Nest explores themes of morality, humanity and friendship through its anti-hero and villain. Randall who yearns for freedom in the institution wages physical and psychological warfare with Nurse Ratched, who is hell-bent in enforcing strict rules and regulations.  Some would argue that the head nurse is just doing her job, but by the film’s climax, she turns into one of American cinema’s coldest and most cruel villains.

While the film is shot from the point-of-view of Chief, Randall remains to be our anti-hero and our rallying point against oppressive authority.  Yet, we occasionally feel that the ruckus he creates borders on lunacy, to the point that it might be difficult to defend his actions.

Therein lies the brilliance of Forman’s film – the development of a complex protagonist and antagonist whose roles interchange depending on the circumstance.  There is no clear case of black or white in this film, which makes it an experience to savor even on its umpteen viewing.  Cuckoo’s Nest is a must-watch for all cinephiles and is most certainly one of the great American films of the seventies.  Highly recommended. 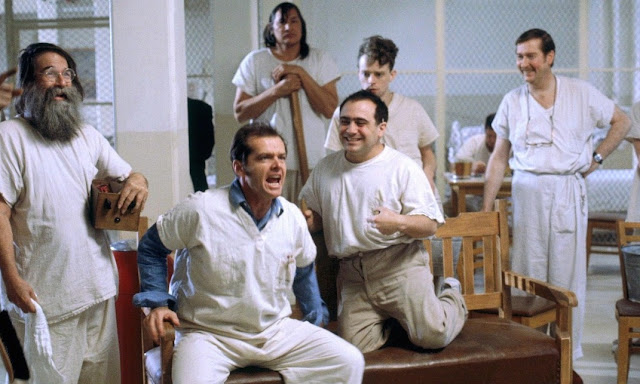