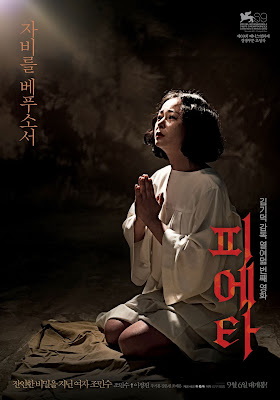 Director:  Kim-Ki-duk
Cast:  Jo Min-soo, Lee Jeong-jin, Woo Ki-Hong
Plot:  A loan shark is forced to reconsider his violent lifestyle after the arrival of a mysterious woman claiming to be his long-lost mother.

“I am sorry I abandoned you.”

The pain of torture, the pain of loss.  Kim Ki-duk is back in the game with this vengeance art film that won the Golden Lion at the Venice Film Festival under unusual circumstances over the more coveted P.T. Anderson picture The Master (2012).

In Pieta, Kim fashions a film with tragic underpinnings as it explores the themes of revenge and family, often in the same breath in this quite affecting drama that features an intriguing plot and superb performances from the two leads.

In particular, Jo Min-soo, who plays a well-dressed middle-aged woman who one day mysteriously appears in front of Gang-do (Lee Jeong-jin) claiming to be his long-lost mother, functions as the emotional anchor for Kim's film.  Surprised and nonchalant, Gang-do continues his violent ways as a debt collector, torturing his victims so that they can claim an insurance payout to pay their outstanding debts.

Pieta is uncompromising in its depiction of torture and incomprehensible violence, although most of which are implied rather than explicit, but they hit you in the gut nevertheless.  Kim uses violence as a counterpoint to fate and loss, two sub-themes intertwined in the film's twisted concept of family.  The characters are imbued with a sense of uncertainty, regret and guilt, and this is one of the key strengths of Pieta.

While they are psychologically motivated, it is a tall order to try to decipher what these characters are actually thinking (or planning).  The mystery of the mother character reveals itself poetically in a tragic sense: the questions asked do not provide categorical answers; instead they bury us into a conundrum in which we emerge disturbed and provoked.

The implications of these questions are monumental as the notion of a mother-son relationship conjures up ideas of unconditional love, child nurturing and individual sacrifice.  In scenes early on when they have just met, Gang-do rapes Jo’s character and makes her eat raw animal entrails.  But we eventually see a drastic transformation in Gang-do's personality that Kim manages to bring across with believability.

Yet the twisted and twisting nature of the narrative brings us unexpected surprise and shock, and also back to the circle of bloody violence, culminating in a final shot that is best described as morbidly beautiful.

Verdict:  Kim Ki-duk is back in the game with this bloody yet poetic revenge drama about family, fate and loss. 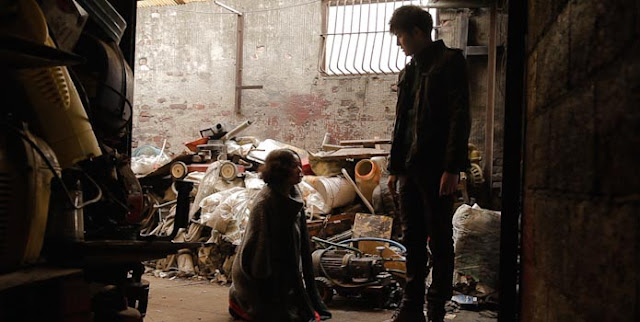 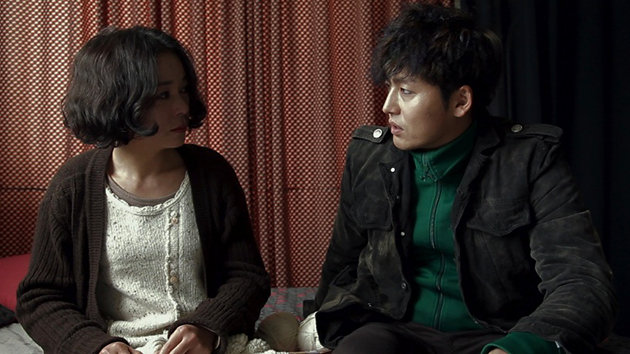