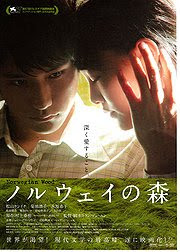 Director: Tran Anh Hung
Plot: Toru remembers back to his life in the 1960s, when his friend Kizuki killed himself and he grew close to Naoko.

IN RETROSPECT
Some might leave a theater showing Norwegian Wood disappointed, but from a cinematic point-of-view, it is a film of substantial quality that should sustain the interest of serious cinephiles from start to end. Running at more than two hours, this Japanese-language film from acclaimed Vietnamese director Tran Anh Hung (The Scent of Green Papaya, 1993; Cyclo, 1995) is beautiful to look at, features top-notch performances from the leads, and has a haunting score by Johnny Greenwood (There Will Be Blood, 2007) that gives a number of scenes a rare intensity in this mostly quiet film about life and death, past and future, and the complications of love.

Rinko Kikuchi, who was nominated for an Oscar for Babel (2006), plays Naoko, a beautiful young woman who has been emotionally troubled by the suicide of Kizuki, her lifelong friend and lover. Soon after, Toru (Kenichi Matsuyama), a close friend of both Naoko and Kizuki, develops romantic affection for her, in which she reciprocates. However, a sense of loss continues to haunt her, making her distant and introspective. Some time after, Toru meets Midori (Kiko Mizuhara), a very pretty and outgoing girl whom he is also attracted to.

Norwegian Wood, a screen adaptation of Haruki Murakami’s popular novel of the same name, brings forth the tension between Toru’s commitment to Naoko and the possibility of a new life with Midori. Set in the backdrop of student protests against established rule in 1960s Japan, Tran’s film is shot mostly from the perspective of Toru, as he recalls memories of sadness, joy, pain, pleasure, and tragedy. Even for a film that markets itself as a serious but free-spirited romance-drama, Norwegian Wood is surprisingly frank in its treatment of sexuality, which is somewhat instrumental in pushing the film’s plot forward.

Watching Norwegian Wood reminds of Never Let Me Go (2010), also a film adaptation of a novel by a Japanese author. In both films, the atmosphere is melancholically dense, though it is occasionally poetic, sharing similar themes of memory, loss, and love. Norwegian Wood, however, is the far better film because it probes more deeply into the lives of its characters, especially of their emotional reaction to their psychological troubles. However, despite Tran’s excellent direction of his cast, the actors’ performances seem unable to make us feel completely sympathetic for their characters. In a way, the acting is strong but there is a lack of potency.

The director’s near-constant use of extreme close-ups of the actors’ faces as they converse, kiss, and have sex, allows the camera to wrap itself around the space that the couple inhabits, providing added intimacy. There is one memorable long take of Naoko and Toru brisk-walking back and forth in a remote grassland as they bring up the past, ending with the former crying uncontrollably. It is a scene that intensifies the emotional fragility of Naoko, foreshadowing more relational complications.

Perhaps the most powerful scene comes in the final third – the visual juxtaposition of Toru’s inconsolable grief to waves crashing into the shore as dark clouds loom above – which is accompanied by ominous music that makes us feel on edge. In competition for the Golden Lion at Venice, Norwegian Wood has its fair share of detractors criticizing it as empty, slow and emotionally vacant. However, I feel that Tran’s work deserves more praise, and should be viewed not as a failed tearjerker, but a calm meditation on the subject of sorrow and love. 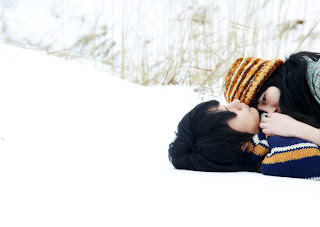 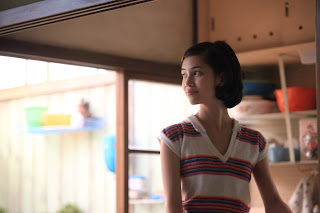