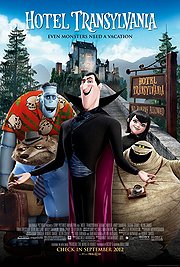 THE SCOOP
Director: Genndy Tartakovsky
Cast: Adam Sandler, Kevin James, Andy Samberg, Selena Gomez
Plot: Dracula, who operates a high-end resort away from the human world, goes into overprotective mode when a boy discovers the resort and falls for the count's teen-aged daughter.

Some animated films are long remembered years down the road after their release, while others are forgotten almost instantly after they are seen. Hotel Transylvania, belonging to the latter category, is no different. Set in a castle far from civilization, the apt title perhaps takes cue from the Romanian region of Transylvania that vampires are often associated with. Helmed by animator Genndy Tartakovsky in his directorial feature debut, Hotel Transylvania is a weak attempt at weaving a love story between a human and a Dracula.

Protagonist Dracula, the owner of Hotel Transylvania, needs no introduction as the protagonist, taking center stage right in the first scene and having most, if not all, of the running time. Voiced by comedic veteran Adam Sandler, Dracula’s character as an insecure, easily distracted and over-protective father is first to turn viewers off for it is a stark contrast from the image that people portray vampires to be, and the fact that this is prolonged in an animated comedy doesn’t make things any better. This continuation for the rest of the film is inevitably a bore to watch and only makes one thankful for its short duration.

Shortly into the film, viewers definitely get Dracula’s predictable intention as it comes with the introduction of a male human. However, the intent is dragged for almost an hour with little effort to create dramatic change that will give any highly desired twist or consequence for Dracula to face. Of course, best known for creating Cartoon Network’s animated TV series Dexter’s Laboratory, Tartakovsky’s creativity in his specialized field can be seen as he stretches the sequence of events to the best of his ability and along with it, the supposed comedic lines and actions. However, the flat humour is obviously forced and far-fetched despite his creative animation skills as even the kids at the preview screening failed to laugh at most of the scenes.

Actress and singer Selena Gomez voices Mavis, Dracula’s daughter and the boy’s love interest. Mavis’ character as the curious, daring and adventurous female vampire saves the disastrous plot to a certain extent, with most of the drama surrounding her as she tries to get to know the boy better. Andy Samberg voices Johnny, the sole human in the film and the one Mavis goes after. Even with some romance added in, the chemistry between the characters is unmotivated and tries hard to convince.

With a largely flat plot, screenwriters Peter Baynham and Robert Smigel are either fairly new to scripting or are not well acquainted with romantic comedies. Baynham’s previous works are evident, having contributed to comedic bombs Bruno (Larry Charles, 2009) and Arthur (Jason Winer, 2011). On the other hand, first-time executive producer of Hotel Transylvania Smigel has only ever helped to co-write slapstick comedy You Don’t Mess with the Zohan (Dennis Dugan, 2008).

Despite a couple of interesting scenes and a party soundtrack culminating towards the end, Hotel Transylvania is at best a family movie to watch on DVD in the comfort of your home with kids screaming and running around. With a sequel slated for release in 2015, I can only hope for a drastic improvement in the story. In the meantime, there are other animated films out there worthy of your attention. 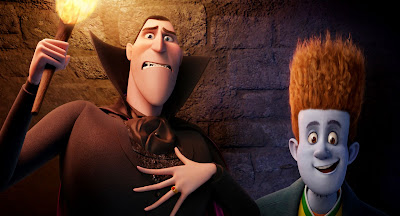 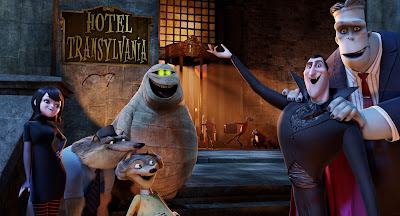