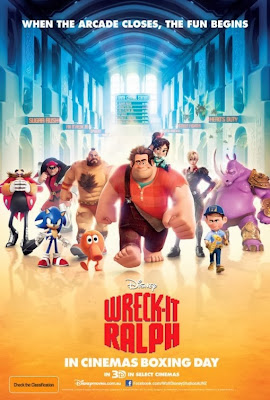 THE SCOOP
Director:  Rich Moore
Cast:  John C. Reilly, Jack McBrayer, Jane Lynch, Sarah Silverman
Plot:  A video game villain wants to be a hero and sets out to fulfill his dream, but his quest brings havoc to the whole arcade where he lives.

IN RETROSPECT (Spoilers: NO)
This film was reviewed in the 3D format.

This is Disney's attempt at creating their own Toy Story (1995). Well, it is not as successful and endearing as Pixar's first feature, but it is bound to get people talking, which is always a good thing. Amping up the nostalgia factor by having its central idea focus on a group of arcade gaming characters who are technically alive, well not after gaming hours, but every single hour.

They are stuck in their own gaming machines, and whenever a kid puts in a few quarters, they simply 'do their duty'. In between games, or after the arcade doors are shut, these characters take a break and mix around with all the other weird folks.

Every hour is a happy hour if you are a good guy like Fix-It Felix (Jack McBrayer). But if you are a bad guy like Wreck-It Ralph (John C. Reilly), you will lead one of the most miserable of lives. You will have to wreck windows with your oversized arms and then be thrown from the roof of an apartment. You will have to do it many, many times as long as that pesky kid keeps slotting in those quarters.

Ralph wants to be a good guy for a change; he wants a shiny medal to prove it. His quest for that glistening token propels this Disney film. It is a fun adventure, with moments of creative delight, and entertains while it lasts.

There is so much colour and energy to the visuals that it is difficult not to stay awake. And did I also say that the film is so tasty-looking that it might be possible to lick it? There are so many sugar-coated objects in the film that they may cause visual diabetes. And I guess that's enough to earn an Oscar nomination for Best Animated Feature.

Wreck-It Ralph contains lots of action, the kind we used to see in old video games, but now appear so gloriously in high-definition. There is a clever joke about that one in the film. Speaking of which, Wreck-It Ralph is consistently funny, though not all hit the sweet spot.

The relationship between Ralph and Vanellope (Sarah Silverman), a cute little girl-glitch, takes over in the second-half of the film. Gone is the need for Ralph to prove his mettle with a gold medal. Themes of ambition and jealousy give way to commitment and concern. This is a classic story of a misfit rising above the brickbats and finding purpose in his life.

Of course, all that is for nuts if someone unplugs all the arcade machines and throws away all the wires. These characters seriously don't know that they have a deep existential problem, and if you think about it, that prospect seems quite disturbing…or fascinating.

Wreck-It Ralph is also fascinating in another way: It is a retro-modern reflection of our obsession with gaming, from the arcade ka-ching to the app machine we hold in our palms. It is one of the more memorable animated films of the year, and I suspect it may go head-to-head, sweet tooth-to-sweet tooth with Pixar's Brave (2012) for that golden man. Unless something else crashes the party…like the excellent ParaNorman (2012).

Verdict:  Finely balances familiarity and predictability, this Disney offering entertains while it lasts. 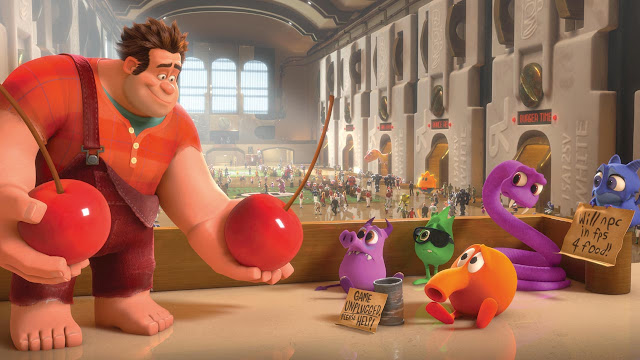 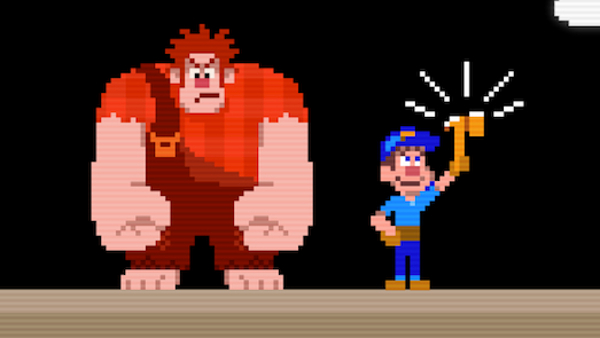