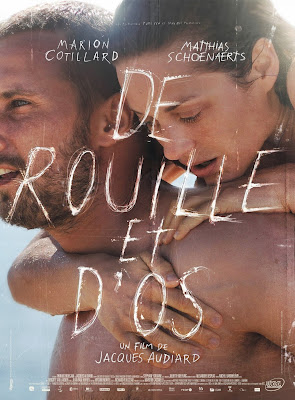 Director:  Jacques Audiard
Cast:  Marion Cotillard, Matthias Schoenaerts, Armand Verdure
Plot:  Put in charge of his young son, Ali leaves Belgium for Antibes to live with his sister and her husband as a family. Ali's bond with Stephanie, a killer whale trainer, grows deeper after Stephanie suffers a horrible accident.

IN RETROSPECT
This film has been relatively well-received in festival circuits, so it should come as a surprise that it is quite poorly-reviewed by this reviewer.  In competition at Cannes, Rust and Bone comes with the reputation of being helmed by Jacques Audiard, who previously made The Beat That My Heart Skipped (2005) and A Prophet (2009), the latter winning the Grand Jury Prize at Cannes.

However, reputation counts for nothing as the film provides this reviewer with one of his more frustrating experiences in the theater this year.  It frustrates primarily because of the film’s inconsistent tone… but more on that later.

Rust and Bone is a story of an unlikely romance between Ali, played by Matthias Schoenaerts (Bullhead, 2011), and Stephanie, played by Marion Cotillard (La vie en rose, 2007).  Ali works as a security guard but takes part in illegal street fights to earn extra money to support his young son.  Stephanie is a killer whale trainer who suffers a horrible accident that sees her lose both her legs.

Prior to the accident, they have met outside a club.  After the accident, they continue to keep each other company – going to the beach to swim and attending the street fights, and curiously after some time has passed, they only start to have sex.

Audiard’s direction of his leading cast is quite excellent, with Cotillard proving to be one of the best French actresses of her generation, easily switching from Hollywood blockbusters like Inception (2010) and The Dark Knight Rises (2012) to more arthouse fare like Rust and Bone.

Her performance here is superb as she plays an amputee with a mix of optimism and resignation.  She is backed by Schoenaerts, who gives a less polished performance in line with his rugged character.  Rust and Bone touches on the theme of the expectations of love – Ali’s love for his son is tested in a harrowing incident towards the end of the film, while his ‘love’ for Stephanie grows deeper, but not exactly satisfyingly, sexual or otherwise.

The problem with Rust and Bone, and it is a huge issue for this reviewer, is the film's very weak handling of tone.  The music used - a combination of non-French pop tracks and Alexandre Desplat's underused score - does not help to focus the viewer's emotions.  It is loud and harsh when it does not need to be, and the transition to the more evocative music by Desplat in many scenes feels jarring.

As a result, Rust and Bone while finely acted seems to be fragmented because of its inconsistent aural tone.  It is frustrating to watch, and the entire experience feels underwhelming and below average.

Verdict:  Audiard's direction of his actors is quite excellent, but the film is tragically marred by his very weak handling of tone.