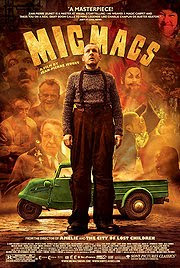 THE SCOOP
Director: Jean-Pierre Jeunet
Plot: A man and his friends come up with an intricate and original plan to destroy two big weapons manufacturers.
Genre: Comedy/Crime
Awards: -
Runtime: 105min
Rating: NC16 for some sexuality and brief violence.
TRAILER:
OST:
IN RETROSPECT

The highly-acclaimed director of Amelie (2001) brings fans back to his whimsical world of comedy with Micmacs, a fun, entertaining, and cheeky outing that does not have a single dull moment. Jean-Pierre Jeunet, the French director of some of European cinema’s most stylishly creative films, takes rein over a film which has a story that goes like this: A guy named Bazil (Dany Boon) unluckily gets shot in the head but recovers to be adopted by an oddball family of “circus freaks”. Together, they seek to help Bazil to find, capture, and embarrass the people who were responsible for manufacturing that bullet that is still stuck in his brain.

Micmacs is a light-hearted take on crime – the crime of producing and selling weapons to maim or kill humans in wars. So with Bazil spearheading his team, they seek to destroy the egotistical heads of two companies that run such an evil, money-churning business. And they do so in the most bizarre fashion anyone could think of – by playing to the physical, intellectual, and courageous strengths of each person. There is a contortionist, a human cannonball, a human calculator, a black who speaks via the art of abstraction, an old man who improvises and creates things out of scrap metal, and a couple of others.

Though the entire film could have been dreamt of by a director like Terry Gilliam (Brazil, 1985; The Imaginarium of Doctor Parnassus, 2009), Jeunet makes Micmacs his own with his incredible color schemes. His trademark use of soft orange and yellow give the film a sort of lively glow that makes it look eye-pleasing. Together with the fluidity of the camerawork, it is difficult not to become engrossed in the film’s setting and characters. Apart from a couple of sex scenes integral to the plot, Micmacs could have been a children’s movie, though that would be an insult to what Jeunet has accomplished here, despite how silly the film seems to be.

Micmacs is playfully-directed, and the manner in which Jeunet tricks us with some oh-I-didn’t-see-that-coming moments would most likely please us and tickle our funny bones. Most of the comedy come from physical situations that the characters find themselves in. Special credit should be given to Boon whose expressive bodily and facial movements channel the spirit of Charles Chaplin and Buster Keaton. Micmacs is visually stunning, with Jeunet flexing his creative muscles by superimposing moving images of what Bazil is thinking about on his forehead as he copes with anxiety issues. There is no doubt that with this quirky effort, Jeunet has once again proved that he is one of the few masters of inventive cinema.